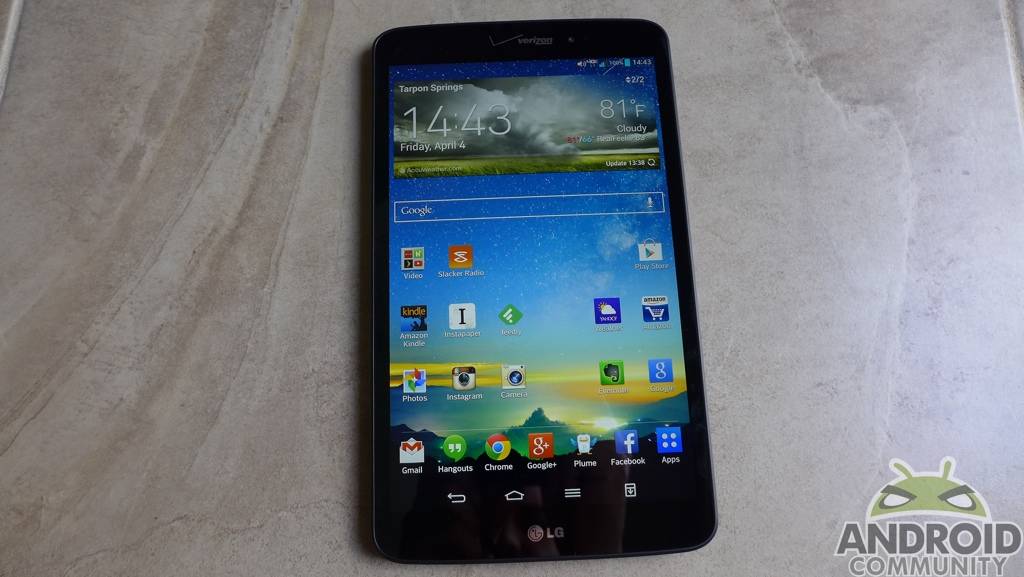 LG released the G Pad 8.3 in the US back in October of 2013. The initial release was a WiFi only model, and that was followed up by a Google Play edition. The GPe model was also WiFi only in terms of connectivity, however a cellular connected model has since come available through Verizon Wireless. We’ve been playing with a review unit for the past few weeks, and at risk of offering a spoiler in the beginning, we can say there hasn’t been any disappointment.

Basically that is to say the Verizon model LG G Pad 8.3 with LTE has kept the same overall build quality. A quality display and a durable (and good looking) metal backing. The tablet has an 8.3-inch Full HD display, and while the overall size of the G Pad 8.3 is bigger compared to 7-inch tablets — it is still able to be held one-handed. Obviously, there is some size difference between this model and say, the Nexus 7, but we feel the G Pad 8.3 serves a rather nice middle ground for those not willing to step up to a 10-inch tablet.

The device has a quad-core 1.5GHz processor with 2GB of RAM and 16GB of internal storage. We didn’t experience any performance related issues. Our usage included some reading with Instapaper, Feedly and the Kindle app, music with Play Music and video with Netflix, Hulu Plus and YouTube. Of course, there was also the basics such as email and Hangouts as well as Twitter, Facebook and Google+. Pretty basic stuff, but similar to how we suspect many would be using an 8.3-inch tablet.

The gallery sitting below contains some benchmarks, just in case you’re the type that likes to see those numbers.

As for the storage, of the 16GB available at launch, we ended up with roughly 9GB free after our set of apps were installed. Not great, but that is just about what many would expect with a 16GB device. Thankfully the G Pad 8.3 also has a microSD memory card slot. This one can handle cards up to 64GB in size.

The left side of the tablet is clear, the right side has the power button and volume rocker, the bottom has the microUSB and the top has the headphone jack and microSD card slot. That same card slot also holds the SIM card. The gallery sitting above offers a tour of the device. 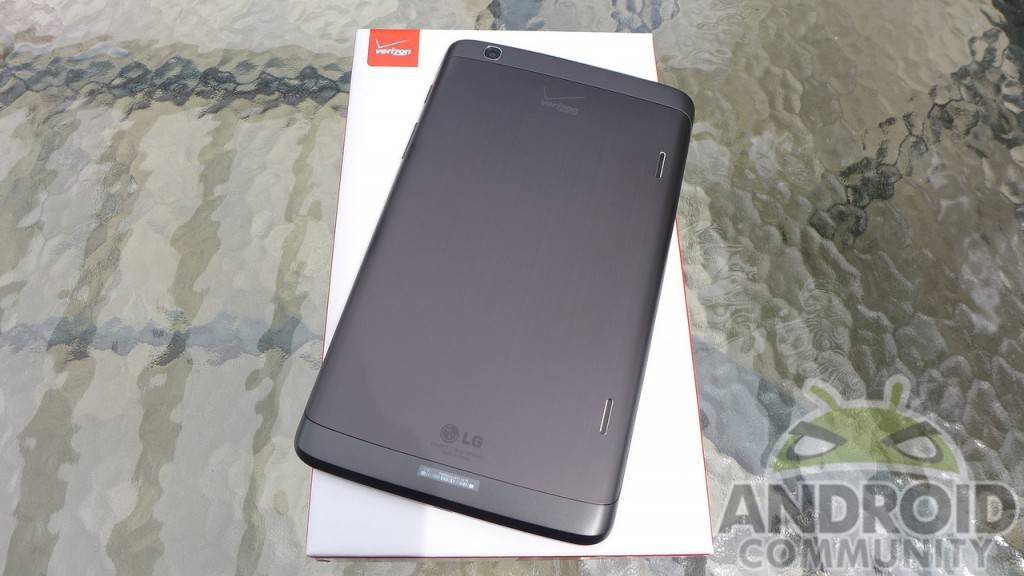 LG has a pair of speakers on the back of the tablet, which run along the side. There is a speaker towards two of the four corners. If you rotate the top of the tablet to the left the speakers will then be along the bottom in landscape mode. The speakers sound good, however if you are holding the tablet and listening to something — you will want it to be in landscape.

The LG G Pad 8.3 LTE is equipped with a 4600 mAh battery. LG suggests that should be good for up to 18 hours of play time. Or for up to 26 days on standby time. We weren’t able to sit the tablet long enough to confirm the 26 day estimate, however we can say it seems to have held well overnight. More realistically, we didn’t have any issues getting a few days of usage.

You can see from the images here in the post that we knocked the battery down to 18 percent after 31 hours and 39 minutes of usage. That left us with an estimation of about 1 hour and 45 minutes before we ran dry. Again, we didn’t see any reason to complain about the battery. But having said that, things will vary from person to person. 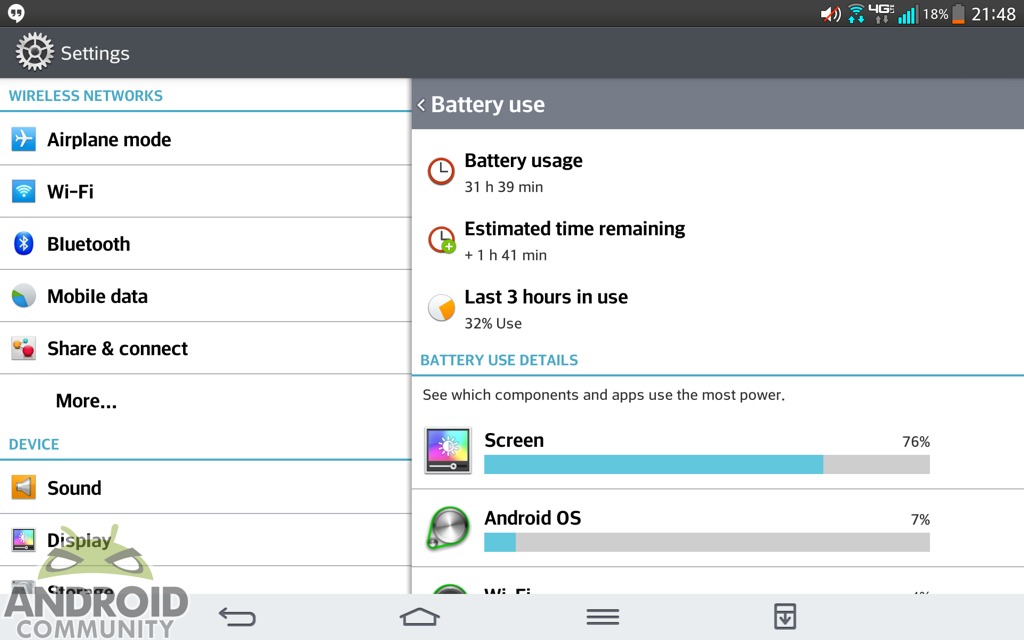 Heavier gaming and lots of video watching will take a greater toll on the battery life. But screen-on time also does a fair bit of damage. As we mentioned, we spent a fair bit of time reading using Instapaper, Kindle and Feedly and of that battery example — 76 percent was screen time.

We should also point out that we are not very battery friendly. We have cellular and WiFi turned on. As well Bluetooth and GPS were also active. We also don’t believe in holding back notifications and apps were free to check as the defaults allow for. Bottom line here, we tend to use the tablet exactly how we want, and then deal with what that does to battery life. But in this case we think it turned out rather well. 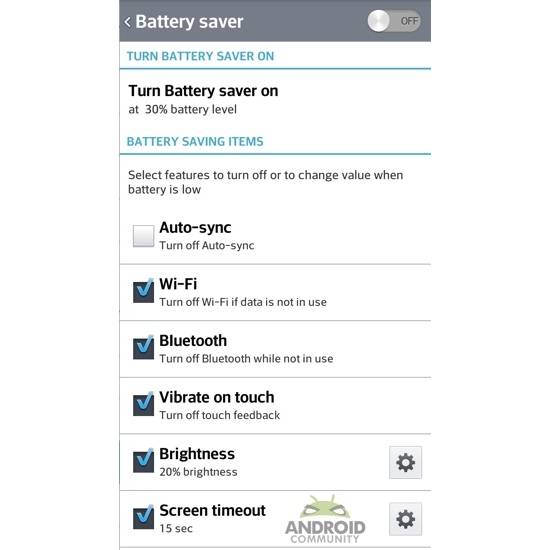 We should also point out that LG does have a battery saver option. This may be familiar to those using other LG devices, it is called “Battery Saver.” You’ll need to turn this on from the settings, and it will kick on when you get to 30 percent. The screenshot sitting above offers a rundown of how Battery Saver can be further customized once activated.

The Verizon LG G Pad 8.3 is running Android 4.2.2 Jelly Bean. And as one would expect — there is also a fair amount of apps that have been pre-loaded. These include a variety of Amazon apps, as well as others such as iHeartRadio and Polaris Office 5. Verizon also has their apps, which we find to be somewhat useful. The tablet has the Mobile Hotspot app and the handy My Verion Mobile app amongst others. 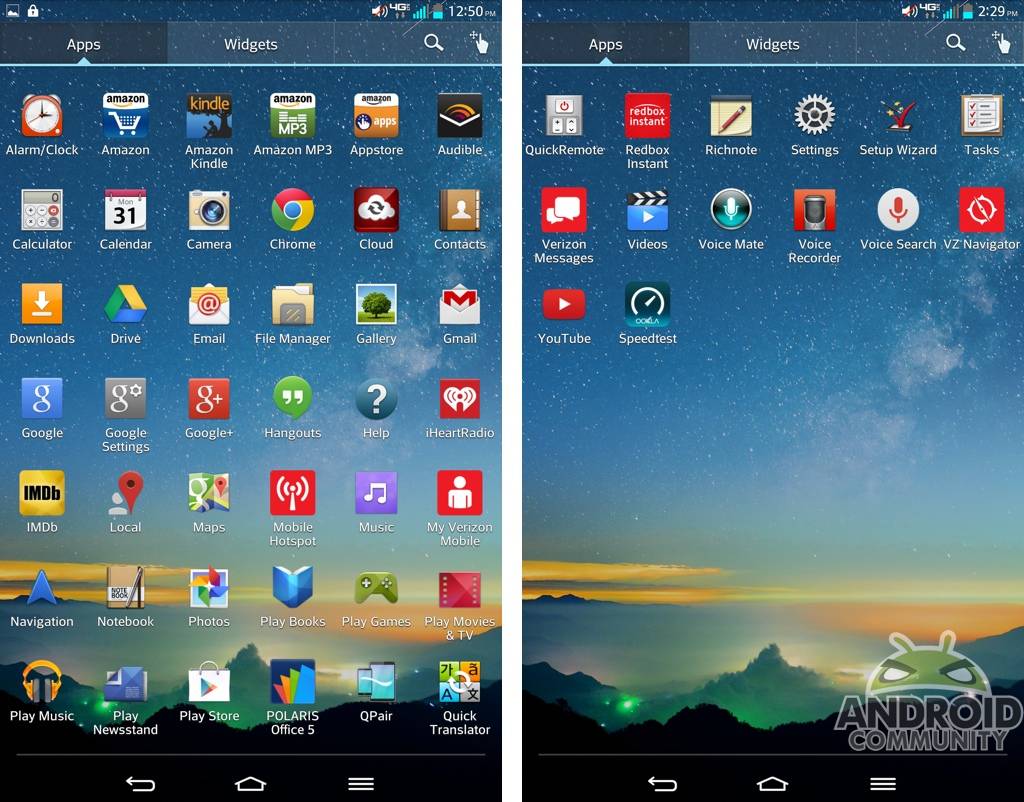 The screenshot sitting above offers a look at what can be expected at first boot (with one exception, the Speedtest app).

There are some real highlights outside of these pre-installed apps though. Sitting along with 4.2.2 Jelly Bean are some LG tweaks. This includes features such as KnockON which allows you to wake the display with a double tap. You can also double tap to put the tablet back to sleep. Other LG highlights include Slide Aside, QSlide Function and SmartShare. Overall we like what LG has done with Android and find the experience to be solid when jumping between LG tablets and smartphones. 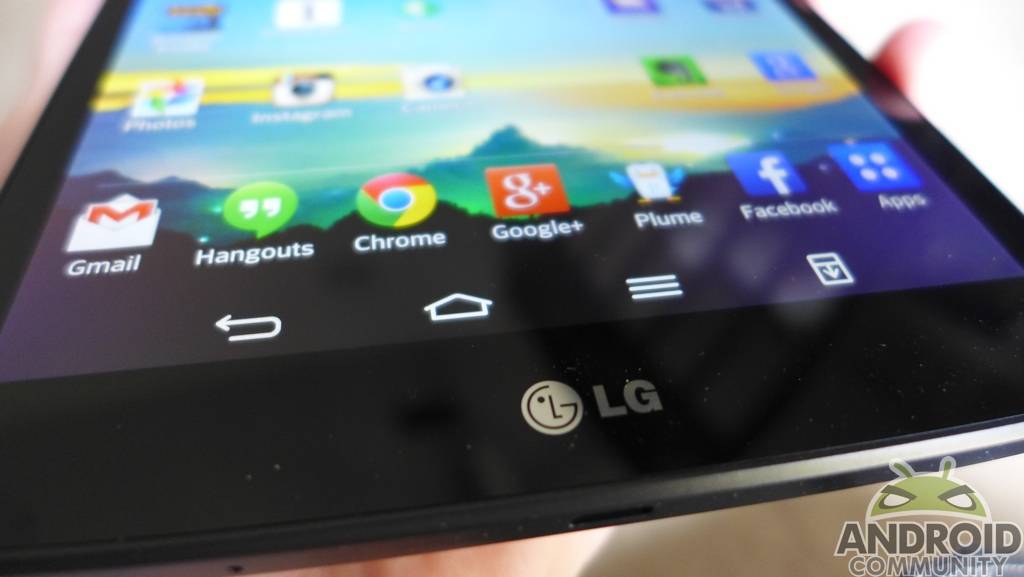 LG also offers a few other goodies, such as the ability to customize the navigation buttons. There are a variety of preset options to choose from in the settings. You can adjust them by going to Settings -> Front touch buttons. The example you see above offers Back, Home, Menu, Notification Shade. That last one will lower (and raise) the notification shade. Simply put, LG device owners should spend a bit of time poking around the settings to see what options work best based on their personal usage.

Connectivity is s bit of a touchy subject as it tends to vary from market to market. It will also vary from day to day in some cases. We’ve seen much faster speeds coming from Verizon, however a random test at noon offered the following; 25.36 Mbps down and 15.50 Mbps up. We always like to see faster, but this is more than enough for streaming audio and/or video.

So — you have a tablet and want to take pictures. We aren’t necessarily fans of seeing people use tablets to take pictures out in public. But at the same time, we aren’t going to judge. Plus, we also have to remember the saying about how the best camera is the one you have with you.

We’ve included a few sample images, as well as a sample video. These were simple quick shots and a basic video. More important — they were shot (captured) and uploaded without any editing. You can judge the quality for yourself.

As we mentioned earlier in the review, the LG G Pad 8.3 LTE serves as a nice middle ground for those who want something between the 7 and 10 inch form factors. This one offers a bit more screen real estate and manages to keep things in a form factor that is still easy to hold with one hand.

Not to mention, the display, day to day performance and battery life left us with little reason for concern or worry. In fact, we’ve suggested this device to a few family members that had been asking about tablets. At present Verizon has the LG G Pad 8.3 LTE selling at $199.99 on a two-year agreement.

As with other tablets, this can be added to a Share Everything plan for $10 additional per month. While the $199.99 price point isn’t bad, and despite knowing that price if often a factor — we may suggest shelling out the extra $100 (if possible) to grab this without the agreement. The no-contract price is $299.99.

Bottom line, we’ve liked the WiFi only models of the LG G Pad 8.3, and like it even better as a Verizon connected model.