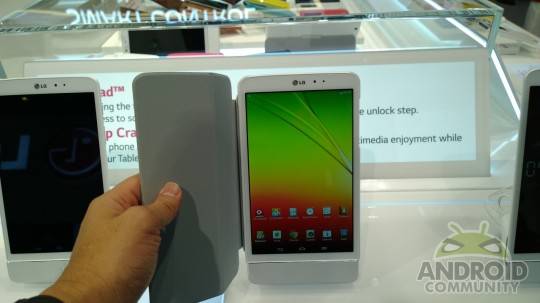 The LG G Pad 8.3 tablet has been rolling out globally and it looks like there has been another release. The latest is the US, where the tablet will be available by way of Best Buy. The retailer will have the LG G Pad 8.3 available beginning today for those shopping online. Elsewise, in-store availability will begin on November 3rd.

LG originally announced the G Pad 8.3 back in early-September during IFA 2013. We did spend a bit of hands-on time with the table during the show. For that we have some images (as well as the video) sitting below. In terms of the specs, LG has this one sporting an 8.3-inch IPS display with a Full HD resolution of 1920 x 1200 and a ppi of 273.

The tablet is powered by a quad-core 1.7GHz Qualcomm Snapdragon 600 processor which is paired with 2GB of RAM. Other specs include 16GB of storage, a microSD card slot with support for cards up to 64GB, 4600 mAh battery and Android 4.2.2 Jelly Bean. The tablet will also have a 5 megapixel rear-facing camera.

Otherwise, in addition to Jelly Bean, and similar to what we have been seeing with other LG offerings — this one has features to include QPair, QSlide Function, Slide Aside, QuickMemo and others. These are all LG features and QPair in particular aims at keeping those with an LG tablet and smartphone in sync. LG describes QPair as being a “seamless extension to their Android smartphones by providing simultaneous access to recently opened apps, incoming calls, text messages and more.”