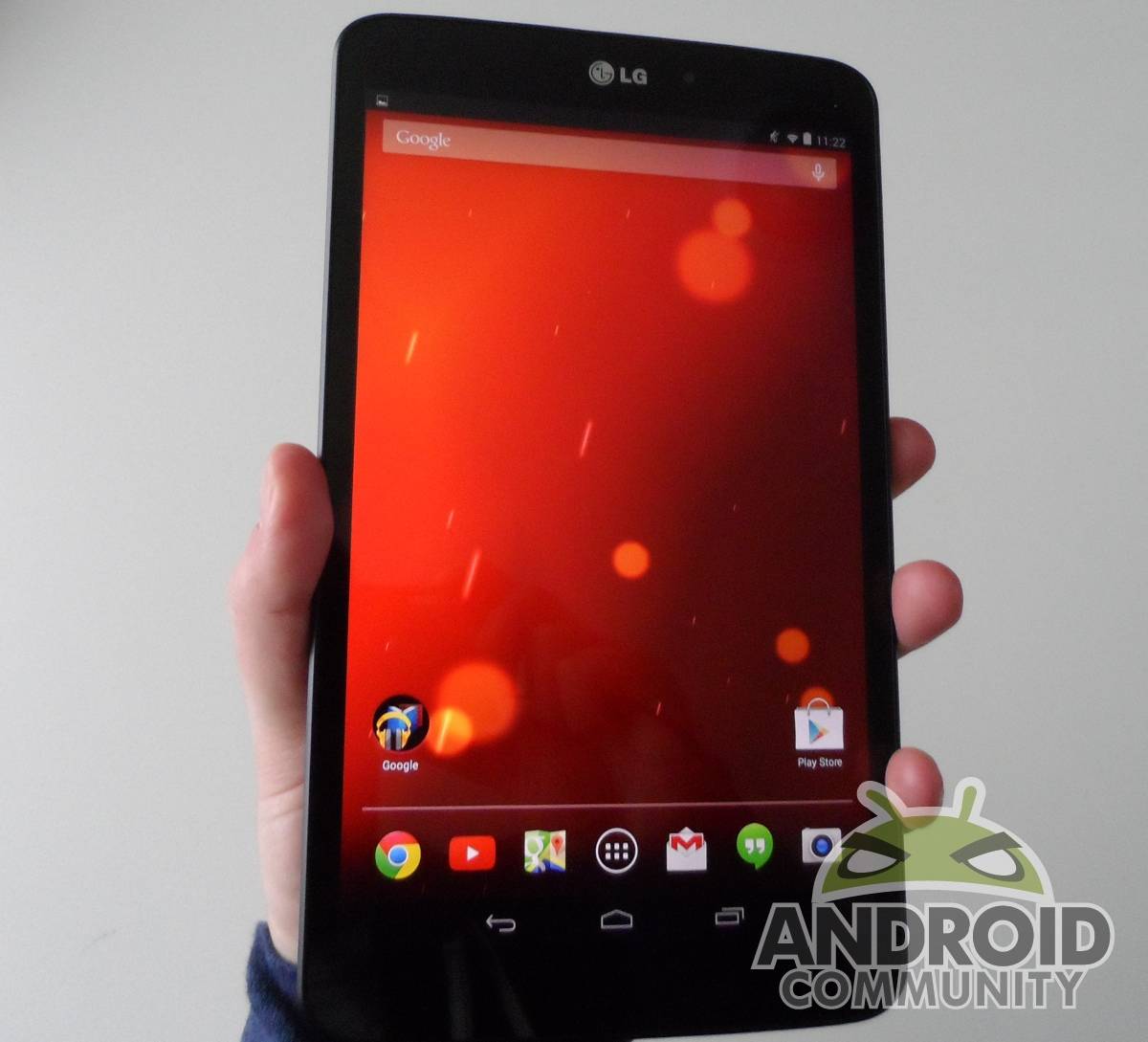 With news of the LG G Pad 8.3 Google Play Edition, we got a welcome surprise. A new tablet on the Play store, in a size that splits the difference between the 7 & 10-inch form factors of the Nexus line. While not officially a Nexus tablet, it does bring a stock Android experience to the table. New size, familiar Android experience — but can it stand up to the Nexus 7?

At 8.3-inches, the screen on the G Pad GPE is a welcome boost from the Nexus 7. While a roundly solid performer, the Nexus 7 is still a bit small for many. A 10-inch tablet can be a bit cumbersome in regard to portability, so in theory the G Pad GPE is just right. At a happy medium between both, we like the screen size for all kinds of tasks. Things like YouTube videos were larger, giving tired eyes a bit more real estate to ease into.

Resolution is a decent 273 PPI at 1920 x 1020, with color reproduction being good, but a touch quiet. We feel the screen is a bit muted, and though we can’t rightly discern individual pixels past 250 PPI, it pales in comparison to the flagship Nexus 7. Like the Nexus 7, it’s a stretched design, not the squared look of an iPad mini. That’s subjective, and we liked the orientation for watching videos, but the same limitations one would find with the Nexus 7, they’re likely to find here. 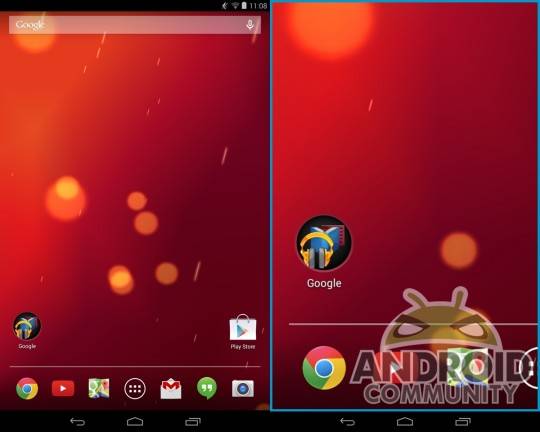 While lightweight at 0.73 pounds, it did become a little cumbersome over time in portrait mode. The height in that orientation added an odd clumsiness, but it wasn’t obnoxious — just noticeable. We liked the extra screen real estate when cycling through web pages, but slightly muted colors and twitchy scrolling (we’ll get to that in a minute) took away from the benefits an 8.3-incher can bring.

The rest of the build is clean, with the plastic on the top and bottom of the rear marrying well with the aluminum back plate. A power button and volume rocker sit on the top right in portrait mode, while the audio jack and microSD card slot adorn the top. The screen is all glass with no hardware buttons; only a prominent LG logo and camera sit at the top. It’s the same around back, as that same LG logo sits quietly in the middle of the device (along with the camera up top), with no Google branding at all. 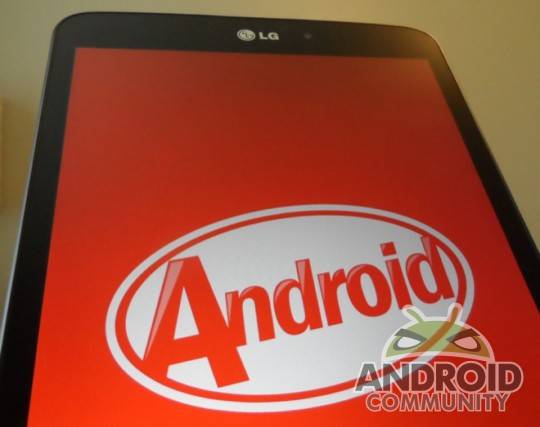 With Google Play Edition devices, we’re expecting a near stock experience. With the G Pad GPE, we didn’t get that. What we got was a straight-up KitKat experience, making the purists here at AC happy. What we lost was some proprietary LG stuff, but that’s expected, and not missed this time around.

While we don’t have ours yet, the device is already getting the 4.4.2 update, which is really quick. We saw a slight delay with the HTC One and Samsung Galaxy S4 updates — because they had some extras slapped in — so the rapid-fire update is a welcome sign. It makes us feel like this really is a Nexus device, but Google chose to build up the GPE program rather than add another Nexus device. That’s a smart move. 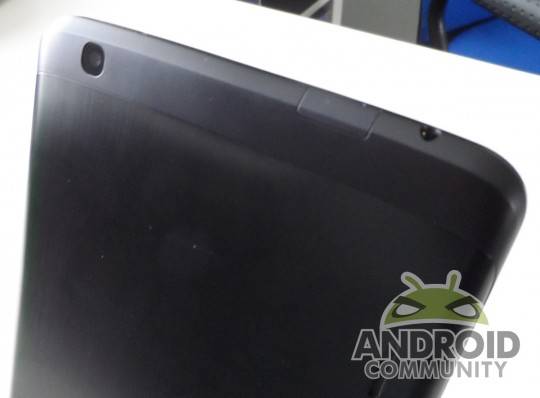 The Snapdragon 600 processor, which promises 1.7GHz of speed, didn’t disappoint. We found responsiveness snappy, and pages loaded quickly. Uploads to Google Drive happened instantly, and we never waited for an app to download; even the larger Asphalt 8 loaded fast. The 2GB RAM is standard, and with cloud storage, the 16GB memory is just fine. For those who prefer to store files locally, the G Pad GPE has a microSD card slot.

Those specs front an experience we found to be lacking, though. When scrolling through web pages, the action was twitchy, snapping to a stop and often scrolling for a few centimeters after. It was like running and trying to stop abruptly, only to have to take a few more steps. YouTube was especially headache inducing, with no discernible rhyme or reason for the scrolling misses. We don’t find that issue on any other device we’ve tested or have on-hand, either — including Android 4.4 handhelds. 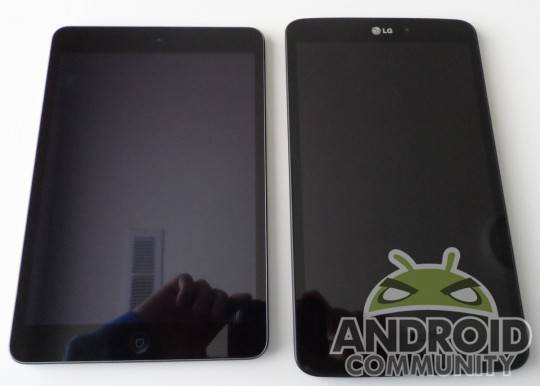 Further complicating the issue was the screen seemed unresponsive to anything less than heavy-handed touch, except when typing, where we found the stock keyboard to be a dream. A quick flip when trying to cycle through a web page didn’t register many times, and subtle taps went unnoticed. We’d like to think there is a software fix for this, so we won’t consider it a failure just yet.

We had no problem with graphics rendering on the device, and played Asphalt 8 a little too much in the name of testing just to prove a point — or at least that was the excuse. Unfortunately, the touch issues took away form the experience, but in a pure graphics sense, the LG G Pad did just fine.

One thing we noticed — and quite honestly loathed — was sound quality. The aluminum back (and probably the light, hollow feeling we noted in our first impressions) made for absolutely terrible sound. The rear-facing speakers are tinny and shallow, causing the entire back panel to give a tactile buzz when holding it. While the screen size is great for lots of things, the sound quality is abhorrent, and makes this tablet immediately questionable as a purchase. If you’re a dedicated earphones user, the experience is fine, but that’s not most of us.

Battery life was just fine, with standby getting us more than we bargained for. Battery drainers like video playback or gaming didn’t seem to be out of line, either. Of course, at 4,600 mAh, we didn’t think it would let us down. In normal use — which was composed of steady Hangouts use, email checking and response, web surfing, and gaming — this one went a full two days without actually needing a charge. We probably could have gone into a third day with no problem, but didn’t want to chance being without it for any length of time. Charging time was adequate, going from 12% to full in just over 2 hours. It maybe worth noting that the device was on about 14 hours a day, with usage paced throughout.

Benchmark results are above, and we’ll let them speak for themselves. For what it’s worth, we won’t dispute them. Unlike some devices, we didn’t notice any odd use-case scenarios where these seem out of line. If you enjoy benchmarks, these are for you. If you don’t trust them any more, at least know that this time, they seem legitimate to us.

We’re really not fans of using a tablet as a camera. It looks silly, and the on-board hardware is never great. The G Pad GPE has a 5/1.3MP ensemble, meaning photos you take will never come out great. If you are using the device and the dog doesn’t something silly you want to snap quickly, it’s fine. If you have to do a Hangouts call to satisfy a face-to-face need, the front shooter is passable. If you think you’ll get any kind of amazing shots with either, you’re kidding yourself.

Video was what we expected: great for stationary shooting with little movement involved. If you need to do that, it’s fine. If you’re going to try and capture some sort of YouTube lightning in a bottle, this isn’t going to help. Grainy and sputtery, it’s exactly what you can expect from the hardware/software onboard. Neither photos nor video were bad, but neither stood out as exciting. 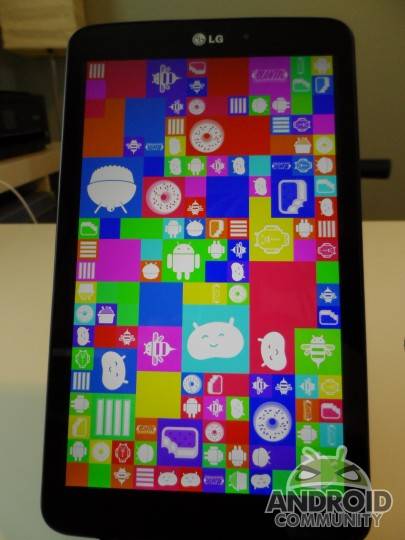 The G Pad GPE fits a role. It isn’t as small as the Nexus 7, making those who want a bigger tablet (but not a 10-incher) happy. It also has the stock Android experience, so those who like quick updates and little in the way of Android will also rejoice. Again, we think of this more as a Nexus tablet than a GPE one.

Sadly, while we wanted to like this device, there are just not enough finishing touches to make it great. Lightness leads to easy handling, but may give off a ‘cheap’ vibe. The screen is a great size, but poor muted tones, touch capacity issues, and scrolling woes make it too easy to put down. The aluminum is a classy touch, and doesn’t contrast with the plastic, but probably contributes to the terrible buzzing during audio.

At the end of the day, we would suggest a Nexus 7 or Lenovo Yoga Tablet. Both could save you a bit of cash over the G Pad GPE, are just as portable, and will probably give you a better experience. We were terribly excited to see a tablet at this size, but it really needs some finesse to make it stand out. While most of the issues we noted (screen responsiveness, scrolling) can probably be solved with software updates, if you’re an audiophile who needs good sound quality, there is no fix. A good tablet, the LG G Pad just doesn’t bring enough to the table to make us want it.