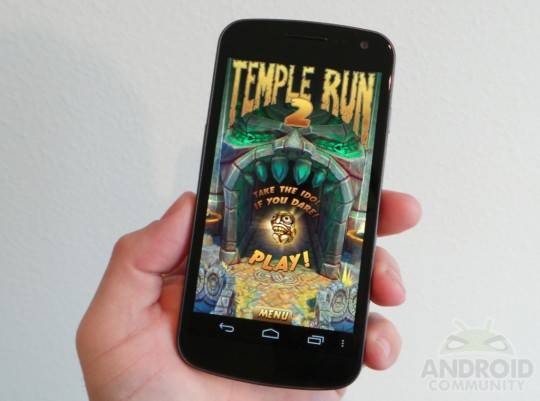 Temple Run 2 launched first for iOS and Android users had to sit back and watch while the game topped the 20 million download mark. Of course, a little bit of a teasing wait seems to only left Android users anxious to download the game and begin playing. In fact, once Temple Run 2 landed in Google Play the combined downloads shot up and achieved a record breaking 50 million downloads in just 13 days.

That being said, that is not to say the app launched perfectly on Android. The app actually launched without support for the back button and an update was quickly rolled-out. And well, it looks like the team at Imangi Studios is now showing support for older devices and devices with lower resolution displays. These goodies come by way of another Temple Run 2 app update. This update brings the app up to version 1.0.1.1 and it remains available for free and by way of the Google Play Store and Amazon Appstore.

Detailing what this update includes; Temple Run 2 users can now expect “improved performance on older devices.” A bit general of a statement, however we suspect you will know if this applies to you. Basically, if you had tried to play the game and had issues, you may want to give it another look. Another fix here includes lower resolution devices, specifically this update fixed layout issues on devices with a 320 x 240 resolution.

Otherwise, this update also fixed the track pop-in issue, a bug that caused the same objective to be shown more than once and “various” other bugs and “minor” improvements. All said and done, a decent update of fixes. Finally, for those who have yet to play Temple Run 2, now seems like as good a time as any to give it a go. And if you need some further convincing — make sure you check out our previous Temple Run 2 coverage which included a quick hands-on and full review.