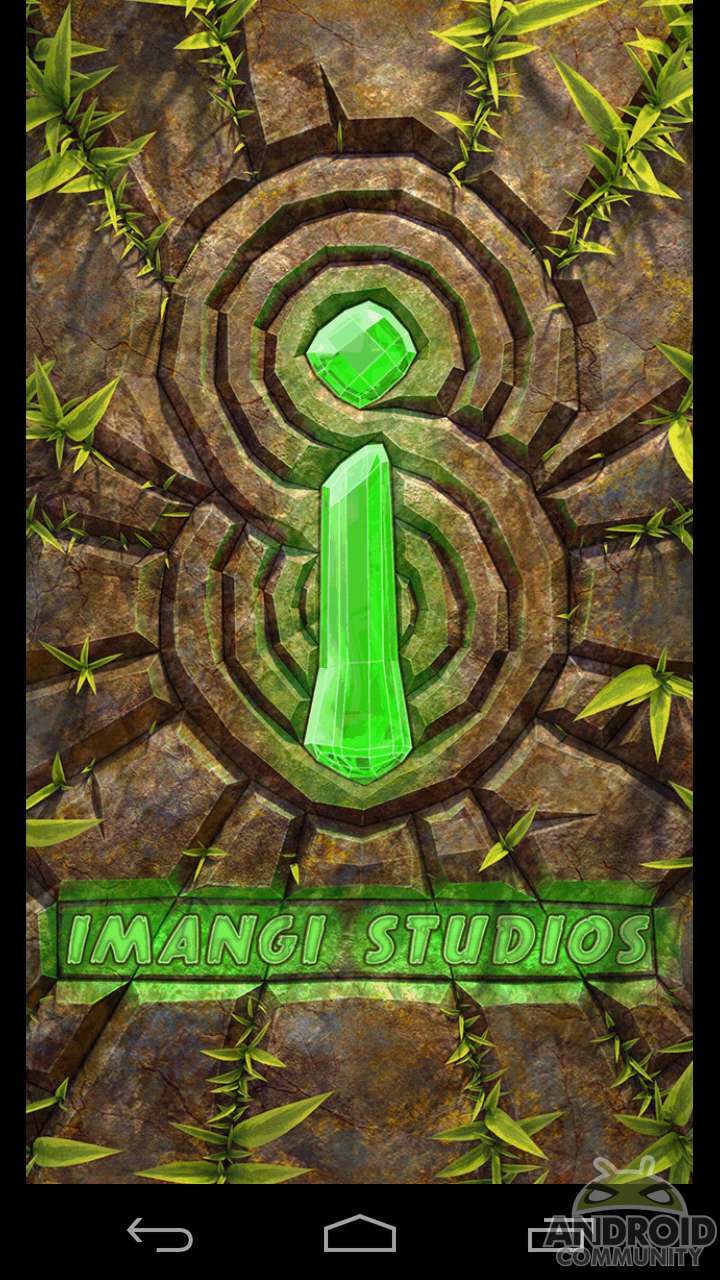 The original Temple Run is one of most popular mobile games ever, so it isn’t any surprise that Imangi Studios is back to offer players another helping. Temple Run 2 is here, and it takes the framework laid down by its predecessor and builds on it ever so slightly, keeping the gameplay of the original intact and as addicting as ever. If you were a fan of the first Temple Run, expect to spend quite a bit of time with the latest mobile gem from Imangi.

For the uninitiated, the idea behind Temple Run 2 is simple: you’re running for your life through an obstacle course that never ends. That means you’ll fail every single time you pick up the game, but it isn’t quite so grim as it sounds. The challenge is getting further than you ever have before, collecting as many coins and gems along the way as you possibly can. You find power ups that allow you to put off the inevitable just a little bit longer, but eventually, your game will come to an end, whether that’s at the hands of the gorilla that’s relentlessly chasing you or due to a nasty fall off the edge of the course. 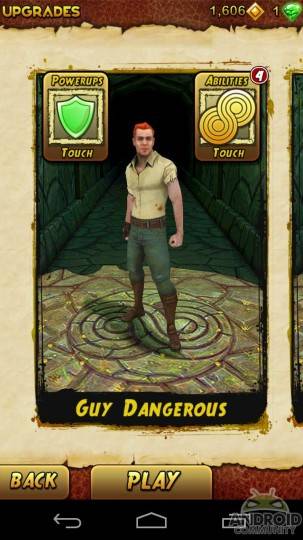 At the start, you’ll control Guy Dangerous, but additional characters can be unlocked with coins you’ve collected and saved. Coin collecting is obviously at the heart of the experience, as you’ll use those coins to unlock new abilities for your character. These abilities can range from increasing the duration of your shield – which will get you out of rough spots often – to increasing the amount of coins you can collect after you run a certain distance. I would suggest not hoarding your coins unless you’re saving up for something really expensive, as each ability makes some aspect of the game easier.

To control your character, you’ll be swiping the screen and tilting your device. Swiping upward will make the character jump, swiping to the left or the right will make them turn in that direction, and swiping backward will make them fall into a slide. You’ll need to tilt your device at certain points throughout the stage to stay on the winding path, which can be a little bit difficult to get the hang of at first. Once it clicks, however, you’ll be weaving left and right like you’ve been doing this for years. 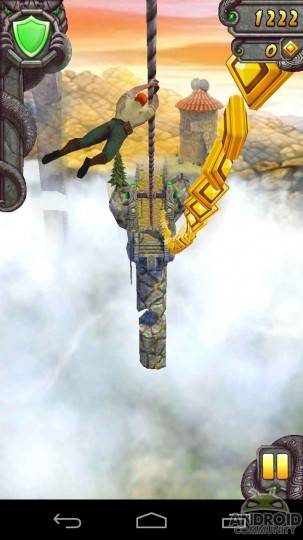 That’s part of what makes Temple Run so great: simple controls. When you’re playing, you’re not trying to remember which direction you need to swipe since the controls are so easy to learn. Instead, the focus is taken off the screen swipes and put onto the frantic action. Temple Run 2 requires you to think quick, because dodging one obstacle might line you up to collide with the next one. Expect more than few frustrating times when you jump over a roadblock only to fling yourself over a turn in the road and off the course. You’ll meet many infuriating ends while you’re playing Temple Run 2, but those make the moments when you’re dodging everything in your path and hitting every twist and turn perfectly feel so good.

So, since the core gameplay hasn’t changed much, what has? The visuals, for starters. The graphics have been given a significant boost from the original Temple Run, and the first game in the series didn’t look half-bad for a mobile game. You’ll have visuals that are much sharper to look forward to, and though I’ve only tested the game on an Atrix HD, I imagine that it will look just as good on larger screens. 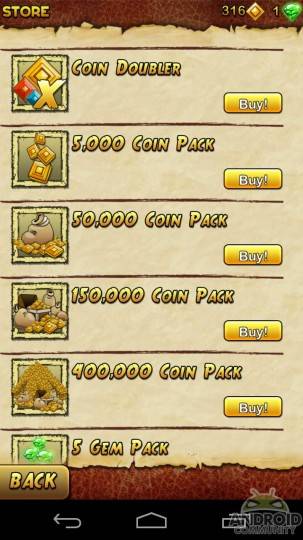 You’ll also have a handful of new obstacles to get through, including traps that spew fire directly into your path and perpetually rolling spiked logs that require you to jump with perfect timing to clear them. These along with the new winding paths should keep even seasoned Temple Run players on their toes, at least at first. The new minecart sequences are a nice change of pace, but they aren’t much different from the core gameplay experience. They do serve as a nice break from constantly running though, and give you a new environment to work your way through.

Of course, if collecting coins and gems (which give you a chance to continue your run and extend the times of some powers) proves to be too difficult, Imangi is all to willing to take your money and shower you with riches in return. It will definitely take longer to unlock everything if you choose not to make any purchases, but earning everything for yourself doesn’t seem to be an impossible task. If you’re quick, you can rack up a ton of coins with each run, so you can enjoy everything the game has to offer without ever paying a penny. 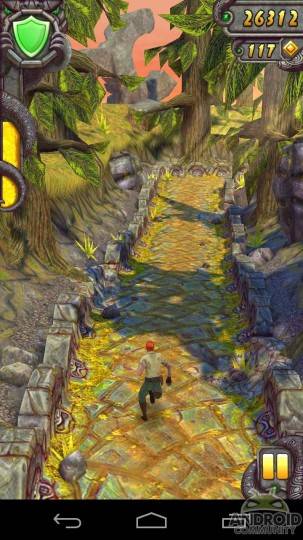 The fact that the game throws coins at you makes each run feel worthwhile – unless you’re beyond terrible at the game, you’ll probably earn something every time you play. It’s going to take some endurance to earn the coins you’ll need to unlock everything, but it never seems impossible. As a result, you have a reason to start another run immediately after finishing one. Temple Run 2 is tough but rarely cruel, and that only adds to the addiction factor.

In the end, Temple Run 2 succeeds because it doesn’t do anything to radically change the formula laid down in the first. The changes are subtle, and as far as I’m concerned, that’s just the way it needed to be. That Temple Run 2 hasn’t changed much will probably dissuade some gamers from picking it up, but if you’re one of the many Temple Run players who only wanted more of the same (with a few improvements to serve as the icing on the cake), then definitely do yourself a favor and pick this one up.