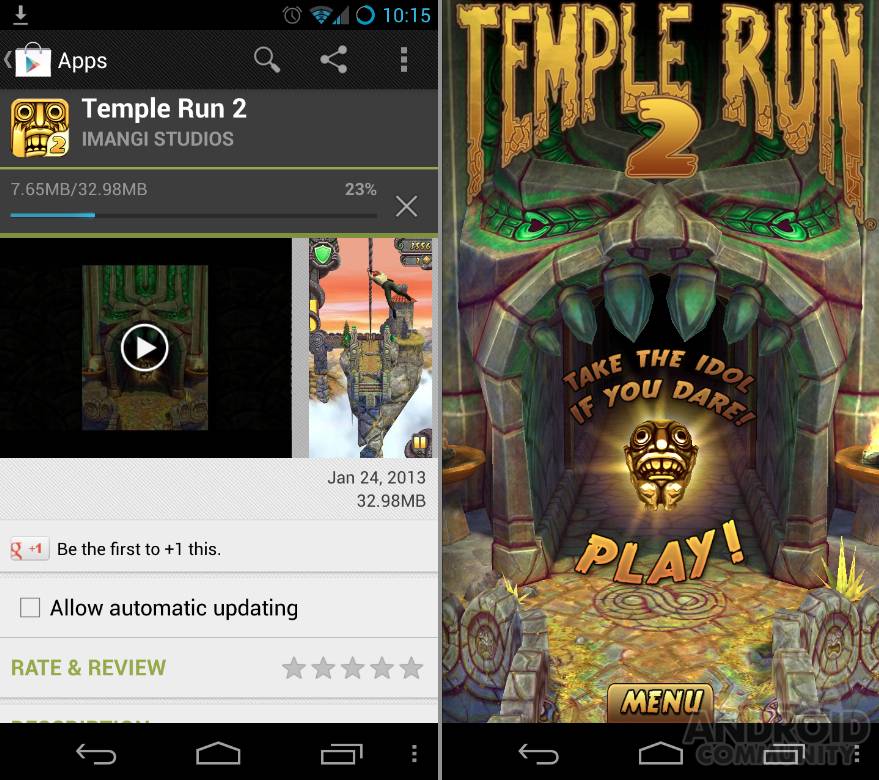 It’s finally here! Just a week after our iOS cousins received the sequel to the hit game Temple Run, the game has officially landed in the Google Play Store and is available for nearly all newer devices. When the original launched in March it was a smashing success on Android, but had been available for iOS for months already. Today we get the awesome and much improved sequel so lets check it out.

Yup, after waiting a few days and dealing with a few fakes hitting the Play Store. Imangi Studios hit game Temple Run 2 is finally and officially available for Android. To get the game you’ll want to [click here] and head to the Google Play Store. The original has been downloaded over 170 million times total, and broke the 100 million mark just months after being available for free on Android. It’s safe to say this is one of the most popular mobile games to date.

So lets talk about the brand new and improved game shall we? Temple Run 2 brings everything the millions and millions of fans love about the original, only in a whole new yet familiar light. You’ll still be running from monsters and monkeys in a Temple, only this time we’re high up in the air while enjoying the sunset. The developers have improved the graphics on all levels — so it might not work on some older devices. Here’s what’s new with Temple Run 2:

This time around you won’t just be running through the jungles, instead they’ve added tons of effects and different looks to keep things interesting. At the same time the gameplay and enjoyment remains the same for the millions of fans. In Temple Run 2 you’ll navigate perilous cliffs, glide down zip lines, mines and forests, and even ride a cart just like Indiana Jones. Who’s ready? Check out our hands-on video coming up shortly:

As you can see with Temple Run 2 the gameplay is fundamentally the same. They’ve seriously increased the graphics and made the entire game just look beautiful and polished. Then the developers tweaked the general idea behind the game to keep things fun and fresh, while still holding true to the original. It plays just like the original with swipes up, down, left, right, and moving the device controls your buddy running for his life. In the end the graphics are better, the gameplay is smoother and a bit more fun, and the scenery will change from time to time and keep things interesting.

We’ve played it on a few of those iDevices, so knew what to expect. One thing I do know. I need to save enough coins to get the Scarlett Fox character. We’ll be enjoying the all new Temple Run 2 for Android probably for far too long tonight, and we suggest you do the same if you like what you see. Have fun and enjoy this awesome game!