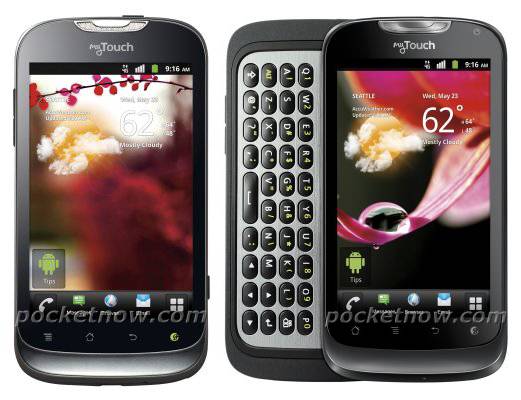 Huawei has been making waves in the Android world for some time now, and according to PocketNow, they’ve got a new feather in their cap when it comes to T-Mobile. A new image has been found of a pair of new entries into the carrier’s line of custom-branded MyTouch phones, presumably replacing the current MyTouch and MyTouch Q by LG. The MyTouch line has been T-Mobile’s staple line for affordable mid-range devices since HTC launched it way back in 2009; assuming that these two phones are alone, that would make the second major change of manufacturer in less than a year.

Like the LG MyTouch and MyTouch Q, the Huawei phones (U8680 and U8730) look identical except for a slide-out keyboard on the latter. Aside from a 800×480 screen resolution and what is almost certainly skinned Android 2.3 Gingerbread, there’s no further information available. In following with previous entries in the MyTouch line, you can expect these two to be in the 4-inch area for screen size and not too far north of the $100 mark as far as price goes. This appears to be a completed press shot, so a release within the next six weeks is likely.

US carriers like to rebrand devices with their own names, especially if the manufacturer isn’t particularly well-known in America – T-Mobile’s already done so with the Huawei MediaPad, re-christened the T-Mobile Springboard. But given Huawei’s well-publicized push to the high end section of the market with its new Ascend D Quad and MediaPad 10FHD from Mobile World Congress, who knows what name will be showing up on the bakc of these two. Also, T-Mobile picking Huawei for its in-house brand is a pretty good indication that they might want more high-end phones and tablets further down the line.