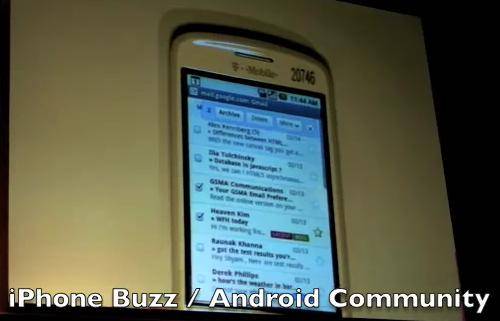 Google took to the stage to unveil GMail’s offline functionality this week, but may have inadvertently announced something else, too: the T-Mobile G2.  Vic Gundotra, vice president of engineering, used the new HTC Magic to demonstrate the app, but rather than Vodafone branding the handset he brought out had T-Mobile’s logo.

Currently, the only announced version of the HTC Magic is Vodafone’s exclusive European deal.  However HTC told Android Community at MWC this week that their deal with Vodafone only covers country-by-country availability, and that if a US carrier approached them regarding a version of the Magic tailored for US 3G they’d jump at the opportunity.

This new branding certainly seems to suggest that rather than being a question of when a US carrier will pick up the HTC Magic, it’s more a question of when T-Mobile USA will announce their sequel to the G1.  For the video of Gundotra’s demonstration, click here.