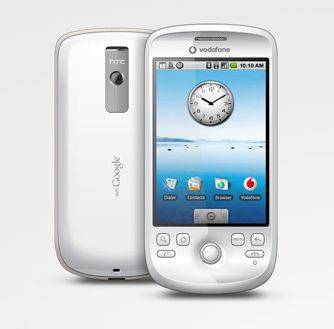 HTC and Vodafone have officially announced the second Android-based smartphone, the HTC Magic.  Available exclusively on Vodafone in Europe, at least initially, the HTC Magic has a 3.2-inch capacitive touchscreen running at 320 x 480 HVGA resolution and, unlike the T-Mobile G1, no hardware keyboard.  Instead, HTC have developed their own on-screen keyboard.

The HTC Magic is based on the Qualcomm MSM7201a chipset running at 528MHz.  It has quadband GSM/GPRS/EDGE and dualband HSPA/WCDMA (900/2100MHz) for up to 7.2Mbps downlink and 2Mbps uplink speeds, network depending.  In addition there’s WiFi b/g, Bluetooth 2.0+EDR and HTC’s own ExtUSB port which incorporates both a USB 2.0 connection and an audio jack (with an included adapter to use standard 3.5mm headsets).

Other specs include GPS – which works with Android’s Google Maps and Street View – and a compass, plus a trackball with an enter button.  All the usual Android apps are onboard, with the Magic having 512MB ROM and 192MB RAM.  The smartphone measures 113 x 55 13.65mm and weighs 118.5g.

As for availability, the Vodafone HTC Magic will initially be available in Germany, Spain and the UK, as well as non-exclusively in Italy, and with the SFR network in France.  No known pricing as yet, but given the nature of the European cellphone market we won’t be surprised to see it free with a new contract.

According to HTC, because of very last-minute hardware changes – including a change in the number of hardware buttons on the fascia – nobody will be permitted to take photos or video of the new HTC Magic.  However we’ll be spending some 1-on-1 time with the device while at MWC, and will be able to bring you some early hands-on feedback, together with these official press shots.