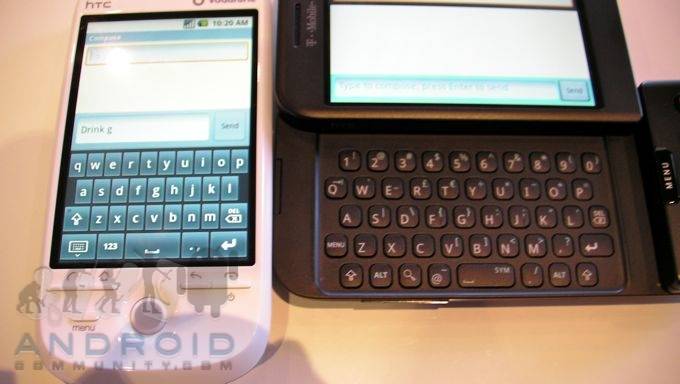 In terms of the hardware, under the hood there’s little different to the G1.  What HTC have tweaked is the software, which has made the capacitive touchscreen more responsive and the smartphone as a whole speedier.  The Android software stack itself has few differences, the most obvious being the new on-screen keyboard.  80-percent of the time the Magic is used in portrait orientation, and the keyboard won’t work in landscape orientation aside from with apps – such as the browser – that force the Magic to rotate the display.

There’s also now native video recording and playback, rather than requiring users to add their own media software.  The former offers two quality levels, one for MMS and the other slightly higher, while the latter is integrated with the photo gallery.  As you can see from the gallery, content is organized by photos and video in general, and those shot by the Magic’s own camera.

Since the announced Magic handset is dual-band 3G/UMTS (900/2100MHz), I asked Eric whether HTC had any plans for a US-spec version or if their agreement with Vodafone prevented that.  According to him, the carrier exclusivity is limited to country, not global, and HTC would jump at the opportunity to adapt the Magic for the US should they be approached by one of the carriers.  We also clarified the handset’s name: despite what many sites have reported, the HTC Magic is not the “G2”.  HTC named the smartphone, and Vodafone decided to use that title, whereas T-Mobile chose to use their own name when they launched the G1 (hence the handset being available as the HTC Dream elsewhere). 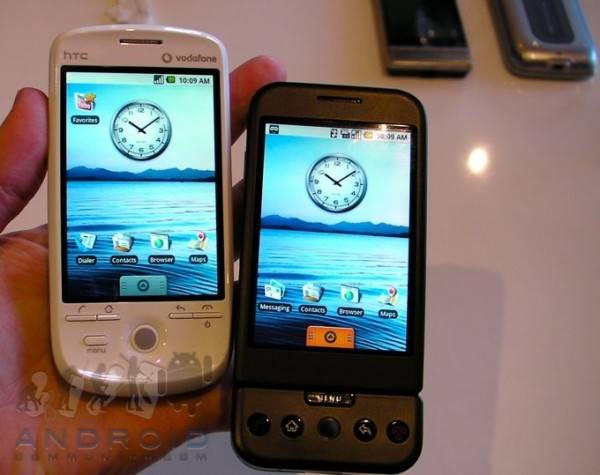 Eric also showed us a black version of the Magic, though we were not allowed to photograph or video it as it’s not intended for production.  HTC decided it looked too similar to other smartphones, and wouldn’t be distinctive enough.  It’s a shame, as the black version looked even smaller than the white, and with its curved edges reminded us a little of the Pre.

There’s still no flash to accompany the 3.2-megapixel autofocus camera (which is the same as on the G1); according to Eric, that’s down to HTC prioritizing the areas in which they can make the most effective improvements in the timescale available.  HTC recognize that, as a company that not long ago only dealt with enterprise hardware, they’re playing catch-up on some consumer functionality such as imaging; they chose to finesse the existing hardware, particularly the white balancing, rather than introduce a flash which wouldn’t be best taken advantage of.

In the hand, the HTC Magic is deceptively light and, although all plastic, feels great.  It’s an altogether more tactile device than the G1, in no small part because of the reduction in bulk and sleeker casing, though obviously we’re yet to play with the final-production button design. Touchscreen responsiveness seems on a par with the iPhone, at least during our relatively short time with the Magic, and the reduced thickness and less pronounced “chin” angle make it more comfortable to hold than the G1.

Overall, the Magic feels much more like a consumer-ready device than the T-Mobile G1 did at its launch.  That’s partly down to the extra maturity of the Android platform itself, but it’s also thanks to a more attractive, perhaps more considered design.  Whether it’s actually consumer-ready in practice depends on the final tweaks HTC make before the Q2 launch, and how robust Google’s latest updates to Android are.  We’ve certainly left MWC with high hopes about the HTC Magic.