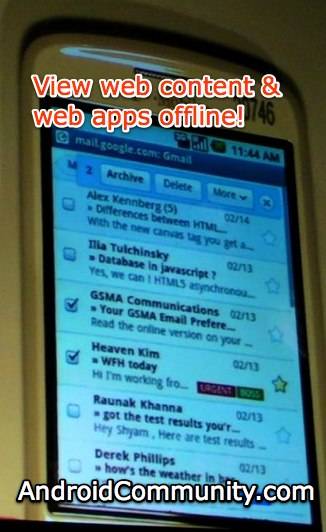 Google have developed a webapp version of GMail for Android that supports offline use, demonstrating it at a Mobile World Congress panel this morning.  The app – which caches not only the user data but also an executable version of the software itself – relies on the AppCache and Database standards of HTML5, which are supported by the Webkit engine that the Android browser is built on.

Because of the underlying standards, the app works identically on any device that supports HTML5.  That means developers need only create one version, which will have both the same functionality and GUI on any other device; Vic Gundotra, vice president of engineering, demonstrated the GMail app working on both the newly-announced HTC Magic and the iPhone 3G, which the Mobile Safari browser of which is also based on the Webkit engine.

While Gundotra described the GMail software as “a technical concept” right now, it certainly looked ready to deploy.  As well as offline support, there is also a floating toolbar that follows email browsing and the ability to add labels.