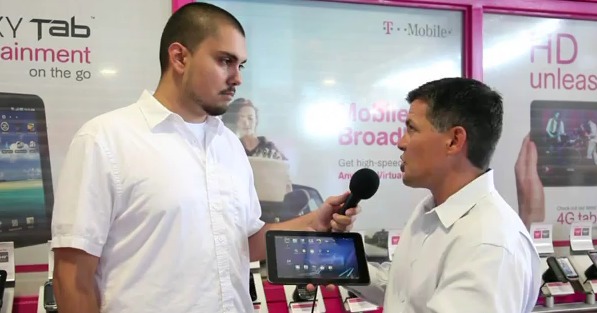 This summer T-Mobile has begun offering tablet rentals at the Los Angeles Angels home stadium for an “enhanced experience” for baseball fans across the board. Fans can rent one of two tablets at one of two locations in the stadium, one of these locations being an actual fully-functional T-Mobile mobile store, their tablet choices being the original Samsung Galaxy Tab 7-inch or the newer LG G-Slate with 3D capabilities and a dual-core processor from NVIDIA. I think you know which one we’d choose. Both tablets are available for rent for the whole baseball game for $10.

As you’ll soon see the T-Mobile spokesperson note, these tablets play host to a set of pre-loaded apps that include interactive apps that work with the game itself, like a speed test for pitches, stat apps for players, and of course a full program which you’d otherwise be paying $4 for in its paper form. Of course then you’ll not be able to keep said program, but what do you do with it anyways once you get home? It’ll end up in the trash, man, littering!

Of course with either tablet, you’ve got the ability to download apps from the Android Market using your own account which you can log in with once you’ve got the tablet in hand AND you’ve got a full speed connection to T-Mobile’s mobile network inside the park which we hope very much would be working at full speed for said promotion. The original Galaxy Tab will only be able to enjoy a basic range of apps made for single-core devices while the G-Slate will of course get full access to the NVIDIA Tegra Zone selection of apps as well. Whether or not fans will be wanting to play Pinball HD during the game or not is up to them – maybe for the kids bored by the third inning?