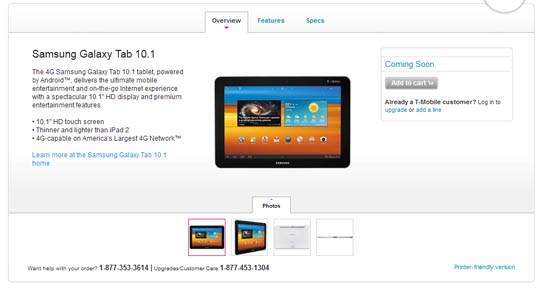 T-Mobile customers have been waiting patiently for their version of the ubiquitous Samsung Galaxy Tab 10.1, and come November 2nd, they’ll be able to pick them up online or in retail stores. The T-Mobile (Huawei) SpringBoard will go on sale a few days later on November 7th. T-Mobile revealed the dates on its website, but unfortunately hasn’t let the prices out just yet.

According to a leaked T-Mobile roadmap (which has been on the nose for pricing so far), the Galaxy Tab 10.1 will be going for $399, while the 7-inch SpringBoard can be yours for an economical $199. TmoNews is reporting that the SpringPad might be going for as low as $179. Both of those prices include a two-year data contract, unfortunately. The good news is that both tablets will be taking advantage of T-Mobile’s “4G” HSPA+ network, meaning that in most T-Mobile areas they’ll be surfing and downloading at a pretty good clip. Both the Galaxy Tab 10.1 and the SpringBoard use Honeycomb, though the exact version isn’t disclosed.