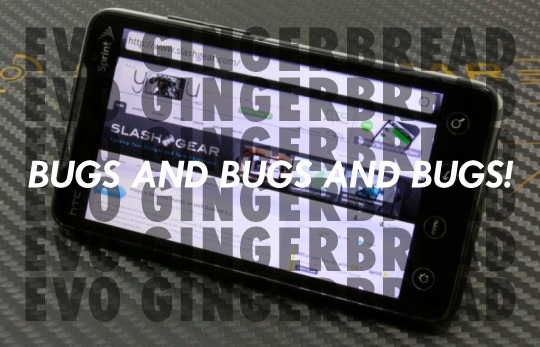 SO we’ve got a whole heap of steaming trouble brewing up with the newest update to the HTC EVO 4G it seems, and it smells like cookies! This update, known by its street name as the HTC Evo Maintenance Release 4.22.651.2, was supposed to fix problems like the random recipient of text messages problem, email attachments not being displayed in the stock mail client problem, and the battery discharge issue – plus, it was supposed to update you to Android 2.3 Gingerbread, of course. What it’s done is, in fact, update you to Android 2.3, but with this update is coming a whole lot more than you may have bargained for.

Users in our forums and comments sections on posts are pouring in their hearts and stomping their feet at the fact that this update has brought with it famine and pestilence along with the lovely new Gingerbread keyboard, amongst other things. A few of the common problems are listed here right alongside some of the oddities – let us know if your problem is on this list or if you’ve got something new to add since you upgraded to the newest version of Android:

UPDATE: There appears to be a fix out for this problem now, an update for which you can get more information in the post linked here. Are all of our problems solved?

DO NOT DO THIS UPGRADE. SENSE UI constantly keeps locking up and forcing close. I keep getting a voicemail alert from sprint…which is funny since I use google voice for voicemail. This also breaks elements of tasker app. was informed by Sprint that there is no option to roll back and that I would be forced to reformat and flash my phone to android 2.2. This aspect sucks since those flash images are no longer available on the web. Research shows that this is a common problem for htc EVO on sprint.

After the update – holding the POWER button no longer allows you to mute the phone or put it on vibrate. Stinks !

Again keep on reporting to us or in the forums or over at the Google Mobile Help forum if you’ve got a trackable problem. If you have a problem and it only happens once, probably don’t report it. If you can prove you’ve got a problem and it’s happening all the time as a result of your update to Gingerbread, report in!