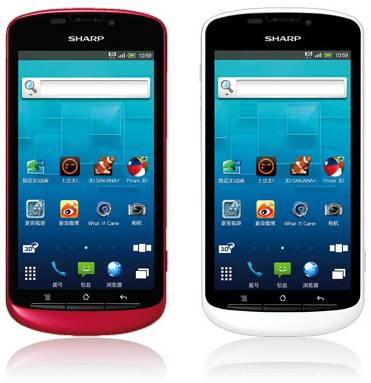 Sharp has another 3D handset in the pipes running on Android 2.3 Gingerbread. You may think the LG Optimus 3D or HTC EVO 3D were first but it was in fact Sharp a long time ago with the announcement back in November, 2010. They later released that phone in May of this year well ahead of LG or HTC and now we are starting to see images of their next creation.

The Aquos SH8298U is an Android 2.3 Gingerbread smartphone with dual 8 MP cameras capable of full 1080p HD video capture in full 3D. It comes with a 4.2″ glasses-free 3D display with qHD 960×540 resolution. We have a Qualcomm Snapdragon MSM8255 1.4 Ghz single-core CPU with 512MB of RAM, 2GB internal storage and more. Everything looks pretty awesome except for the weak 1,240 mAh battery listed. Even sporting HDMI-Out for 3D playback and a dedicated camera button thanks to the Sharp SH8298U product page.

Other then the battery everything else about the phone looks quite impressive. We’d rather have a dual-core but the dual 8 MP cameras make up for that for those interested in the 3D technology. The EVO 3D and LG Optimus 3D both sport dual 5 MP cameras so this new phone from Sharp has a pretty good boost in camera performance. With at least two colors to choose from, a front facing camera, and that nice aluminum wrapped exterior I wouldn’t mind seeing this phone in the U.S but sadly it’s aimed only for Softbank in Japan at the moment.

Do you still think 3D is a gimmick or would you buy this now it has better recording and capture ability with both cameras being 8 MP?