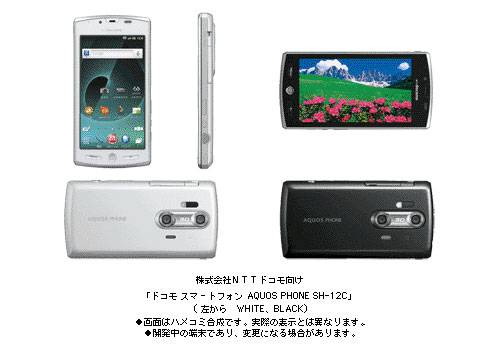 Sharp has been making HDTV sets for a long time now and the company is also in the smartphone market. The latest smartphone to surface from Sharp is the Aquos Phone SH-12C and the smartphone will be heading to NTT DoCoMo. The smartphone has some interesting features and will come in white or black versions. The OS that the smartphone uses is Android 2.3 and the smartphone is designed to be used along with a Sharp Aquos HDTV set for viewing 3D video.

The smartphone has dual 2MP camera sensors and lenses on the rear that allow for shooting 3D photos and the LCD on the front is capable of showing 3D content as well. That camera can shoot both HD stills and HD 3D video as well. Sharp builds the ProPix image-processing engine into the design to make smooth and speedy video processing and more. The HDMI output will shoot the video recorded on the phone out to an Aquos 3D TV for viewing.

The Android OS has the Sharp TapFlow UI over the top and the phone can be tethered to other devices to give them mobile connectivity. The phone has a tentative launch date of May 20 in Japan. The screen on the phone is 4.2-inches and has a resolution of 540 x 960. The phone ships with a 2GB microSD card and supports larger cards for more storage. The screen is described by Sharp as a “New Mobile ASV LCD.” It’s not clear if the phone needs glasses to view the 3D content on its 4.2-inch screen.