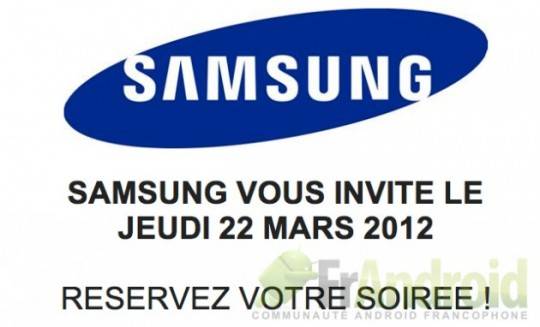 After the disappointing news that Samsung is electing not to grace Mobile World Congress with the presence of its much-anticipated Galaxy S III, many jumped on its French event slated for March 22nd as the possible stage for the phone’s unveiling. Alas, this is not the case: The Next Web heard it straight from the source that the March 22nd event will be more of a showcase for those devices that are displayed at MWC. Also, not to be the person that goes “I told you so”, but.. I told you so.

The French event will serve as a second showing for whatever Samsung shows off in Barcelona in late February and early March, essentially giving local and regional press a second chance at hands-ons for… whatever. But what will that be? Certainly the latest announced phones, like the Galaxy S Advance, will make a showing. There’s been a lot of talk about Samsung’s upcoming 11.6-inch Galaxy Tab, expected to have a high-resolution display and a next-generation Exynos processor. We’ll find out more about a whole range of devices in Spain, except, you know, that one.

Despite months of rumor mongering, there’s still very little that can be said about the Galaxy S III. it will almost certainly have a Super AMOLED display that meets or beats the Galaxy Nexus, and will likely be faster and more capacious that the Galaxy S II. Ice Cream Sandwich with Samsung’s TouchWiz is a possibility that becomes more and more likely as its announcement is pushed back. We’ll probably see the phone released internationally sometime in the summer, but past that, we’re chasing after the wind.