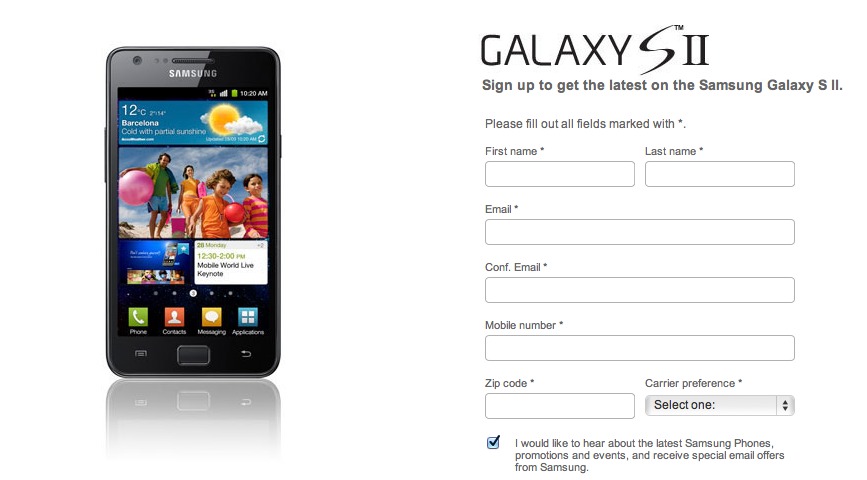 Looks like Samsung’s finally starting to get a move on. We’ve been keeping an eye on Samsung through our handy little telescope and we’ve spied a little bit of movement. Samsung has officially launched a landing page where you can sign up to receive email updates regarding the Galaxy S II’s arrival in the United States.

The rumors are starting to kick into high gear, and a good thing too, as I don’t think there was much patience left. The Galaxy S II launched back in May, but with a limited market. It’s been slowly spreading since then, and now its finally about to land here in the U.S.

We’ve heard rumors of Verizon’s (potentially LTE bearing) being the first to the market, although Verizon has taken back the initial claim regarding 4G. AT&T’s version has popped up in a few pictures already, revealing that they will have a keyboard bearing variant. Finally, a WiMax version, presumably the Galaxy S II Within, recently got FCC approval.

Are you ready for some Galaxy S II love America? Or maybe you’ve already moved on? The HTC Sensation 4G, has been out for T-Mobile for a while now, and the Droid Bionic could finally be materializing soon. The Samsung Galaxy S II is still essentially the most powerful Android phone out there, but in the Android world theres always another new kid just around the corner, and the SGSII has been top dog for a couple months already. That doesn’t mean it won’t be hard to resist though.