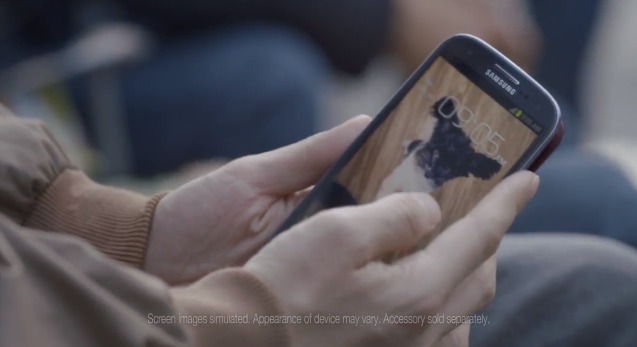 Samsung has been notorious for taking jabs at Apple, especially since they lost to them in court recently. They’ve called out the iPhone 5 just a couple days ago, and now they’re at it again with a new commercial. Samsung mentions in the new ad that “the next big thing is already here”, referring to their Galaxy S III flagship phone.

The commercial pokes fun of Apple’s dedicated user base that are waiting in the line for the iPhone 5, mentioning things like, “I hear the new connector is going to be all digital! What does that even mean? I don’t know, but I’m psyched!” and “I hear you have to have an adapter to use a dock, but they make the coolest adapters!” It’s all fun and games really until we see the Galaxy S III step in.

The iPhone 5 line dwellers soon get a little jealous of the guys with the Galaxy S IIIs and start to contemplate their decision to get an iPhone 5 (that happens all the time, right?). Samsung shows off some of the features of the S III, like a larger display, 4G LTE (which it’s had for a while), and sharing content by tapping phones.

The commercial certainly isn’t Samsung’s worst ad campaign, since they’ve had a couple already that have blown up in their faces. Their Facebook post a couple weeks ago is one example, and Kate Upton showing up with an iPhone at a Samsung event also didn’t go over too well.