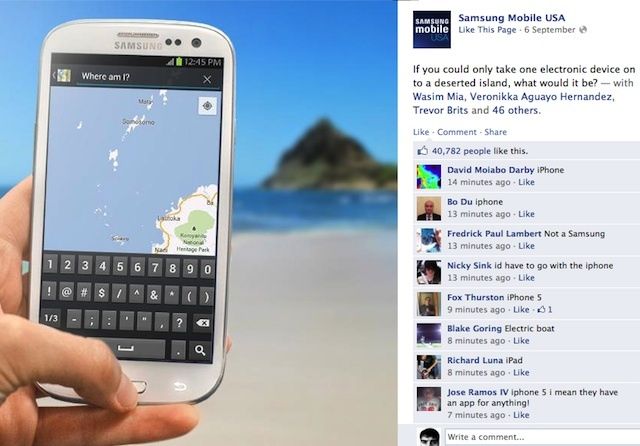 A lot of companies try their hardest to engage their fans on social media to try to bolster up their public image. The best way to engage people is to pose a fun and interesting question for them to answer. However, Samsung‘s question to its followers a couple weeks ago backfired on them pretty badly.

Samsung asked, “If you could only take one electronic device on to a deserted island, what would it be?” The company cleverly posted a photo along with the question of a Galaxy S III with a deserted island in the background in hopes to ween fans in a certain direction. Inevitably, many responders answered with the iPhone 5, iPad, and even things like “not a Samsung”.

Then again, you could see that was coming from a mile away. Samsung simply set themselves up for that one. They ask a fun question and in return they get a number of responses that they probably weren’t quite hoping for.

Of course, just yesterday the company released their latest ad, which takes a jab at the iPhone 5. Obviously, that wasn’t well received by the fanboy community either. Kate Upton didn’t help Samsung’s cause either, since she was seen with an iPhone at Samsung’s Galaxy Note event. Should Samsung keep on churning with their iPhone 5 attack ads, or should they maybe cool it a bit and let the sales figures do the talking?