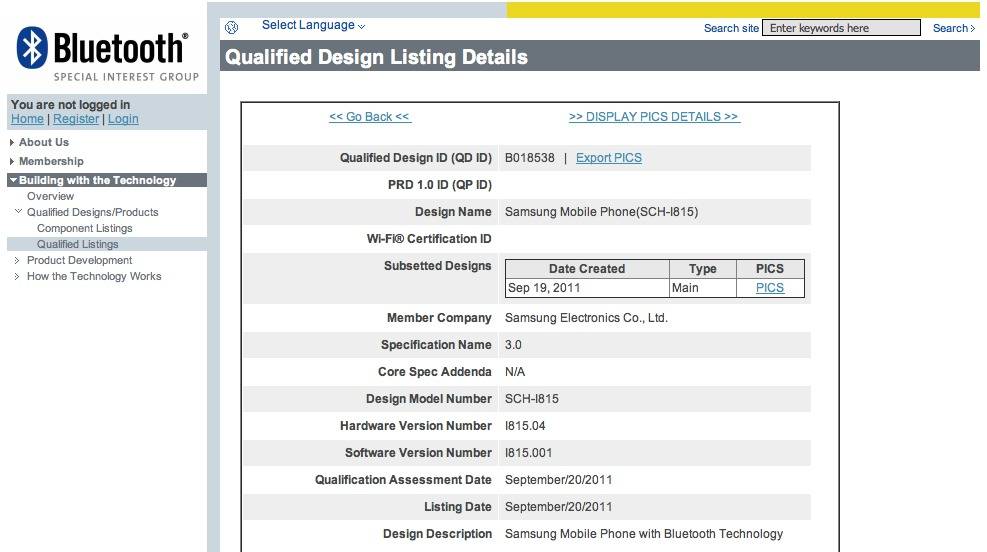 This mystery device just hit and cleared its Bluetooth certification but we know nothing about it. Some are thinking it may in fact be a 7″ tablet headed to Verizon although the picture below says “phone” a few times. The model number SCH-I800 was used for the original Galaxy Tab 7″ on Verizon so this new device with a SCH-I815 model number could very well be the replacement for the original tab.

Have any guesses as to what this might be? We do. First off a replacement for the original 7″ Tab is to be expected although we’ve heard nothing of such device. Yesterday a Galaxy Tab “Plus” was spotted with a T-Mobile branding so this could very well be a similar device for Big Red.

Could the Galaxy Tab 7.7 that was announced at IFA and then quickly went missing be headed to the U.S. market soon? I sure hope so although carrier branded and priced tablets still are a bit expensive if you ask me. Our hands-on with the Tab 7.7 was a pleasant one and the ports seem to line up with what we saw leaked for T-Mobile yesterday that was linked to above.

The other thing to take into account is the Bluetooth SIG mentions Samsung “Phone” so that might throw a few people off, although that could also just be because the tablet will have 3G/4G inside since it seems to be headed for Verizon. A full-sized look at the picture can be found below. We should be hearing more about the possibility of the Galaxy Tab 7.7 soon.