I know we’ve seen plenty of Android 4.0 Ice Cream Sandwich SDK ports and ROM’s that are basically unusable but today we’ve quickly gathered up and flashed a fully functional and stable version of 4.0 ICS thanks to the team at CyanogenMod. What we’ll be showing you below is the first look at CyanogenMod 9 Ice Cream Sandwich for the Samsung Nexus S — and it works flawlessly.

We originally reported this weekend that actual CM9 builds for the Nexus S and Galaxy S were available but today we’ve taken it a step further and have hands-on video for you below. This is currently in alpha stage as I’ve mentioned in my title and in no way represents what CyanogenMod 9 will be once fully released for their wide array of supported devices. If anything, this is merely just a completely stable build of Android 4.0 ICS running on the CM9 kernel that is still a work in progress. 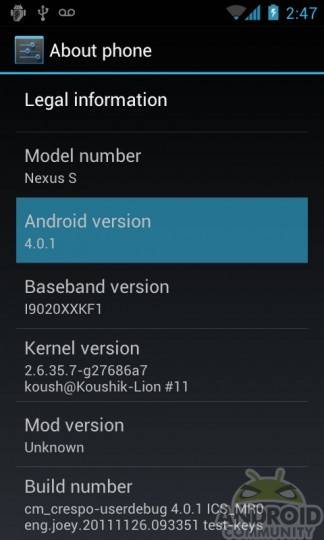 Alpha means exactly that — it’s not near a beta stage yet and is only supported for a very select few devices. Obviously once CM gets up and running we’ll see CM9 landing for all the other popular devices. For now we get to enjoy it in all its beauty on my cracked (sad face) Samsung Nexus S. I can explain things more but the video shows you everything you’ll need to know. Below will be a few links in case anyone wants to partake on the fun with their own Nexus S.

Did I say it runs smooth more than a few times? I think I did! It really works great and I’d completely consider this good enough for a daily driver for most enthusiasts — which is saying a lot for it only being in the early alpha stages. Obviously there will be a few occasional bugs. There are reports of choppy video playback although it seemed quite decent for me and I’ve read MMS have issues but they’ve worked normal here too. For anyone looking to jump into this I can say that so far it’s decent enough to run daily and my experience overall has been very pleasant.

Koush has removed the on-screen navigation buttons which makes sense given we have capacitive on the Nexus S but other then that all the awesomeness from Android 4.0 ICS is present and I love it. For more information on Android 4.0 ICS here is our hands-on, and a full review by SlashGear. Most users should be very familiar with ICS so instead of discussing this awesome alpha build further I’ll just instruct you to the links below so you can get started yourself.
Note* I’m running a kanged version of the alpha 11 by Koush — in case anyone was wondering after seeing the about me screenshot. — Thanks to Joey, Simms, and fits!

Obviously this is for enthusiasts or those that know what they’re doing. I’d recommend a nandroid of your current ROM and all that other good stuff before giving into those Ice Cream cravings. Download ROM Manager and get started right now. I’ve added a few screenshots to the gallery below just in case the video wasn’t enough.