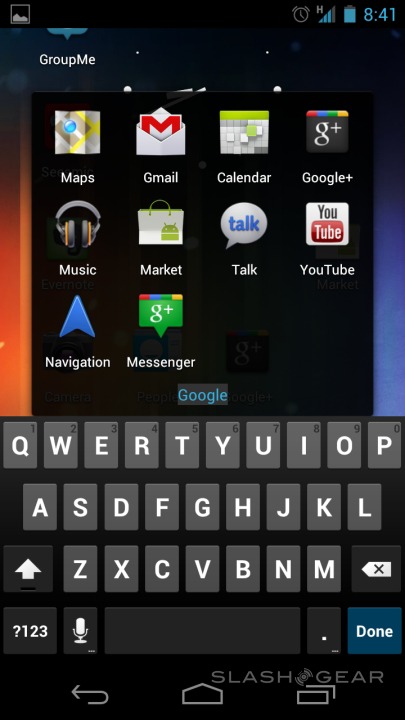 The Galaxy Nexus is exciting to be sure – exciting enough for us to feature SlashGear’s exhaustive review – but what’s really important to the wider Android platform is Ice Cream Sandwich. Android 4.0 is definitely the jewel in the Galaxy Nexus’ crown. They’ve been kind enough to grace those of us without access to Google’s latest developer phone a comprehensive look at the new software. You should definitely head on over there now if you want the full skinny, but for some bullet points of ICS’s new features, check out our wrap-up below.

The first thing you’ll notice about ICS is thew shiny veneer that the UI has been given. As the first major update to the smartphone version of Android in almost a year it comes as something of a shock to those used to Gingerbread. Less so if you’ve used a Honeycomb tablet – most of the visual flair in ICS comes from, or is at least inspired by, Android 3.0. The homescreen gets the most dramatic make-over, with a new launcher and resizeable widgets, all wrapped up in that ice blue on black color scheme. The new unlock screen has a novel facial recognition feature, but it’s more of a toy than a security feature – you’d still be best to stick with a PIN code or pattern unlock.

Much has been made of the Galaxy Nexus’ virtual navigation buttons, a feature that will pop up on all ICS tablets and those smartphones that don’t already have capacitive buttons. It definitely takes some getting used to. Some apps will need to be altered to support the dynamic input area, by either coding in a menu button or placing one elsewhere on the screen. On the other hand, you get a Honeycomb-style multi-task manager. You can swipe apps to the left to instantly kill them – awesome. On top the navigation bar is much as it’s always been, though it’s now much easier to dismiss notifications individually instead on en mass. You also get a handy settings shortcut. 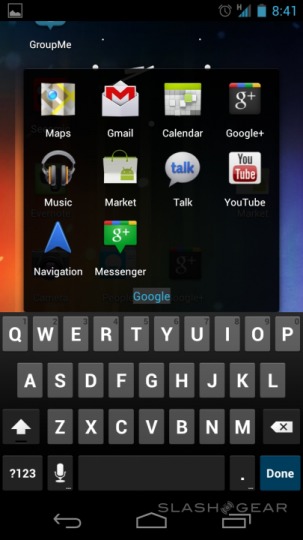 The keyboard has a few style and stability improvements, but the most exciting new feature as far as input goes is active voice dictation. It takes Google’s stellar speech recognition and gives it a live makeover, allowing you to see what you’re “writing” as you speak. The accuracy is impressive, though not perfect, and it makes replying to a quick email a breeze. Watching your words appear as you say them, on a device that fits in your hand, is definitely some scifi caliber stuff.

Most of Android’s core apps get a functionality upgrade to the level of Honeycomb, but the People application deserves some special attention. It completely redesigns the old “contacts” paradigm into something that’s a lot more visible and easy to use – provided that you’ve got photos for all your contacts. Quick response messages, essentially a mobile version of Gmail’s canned responses, make quick replies extremely easy.

The internals of Android get a little more useful with ICS. The ability to actively monitor your data usage is a welcome one for anyone on a capped data plan, and battery tracking is even more detailed. The new camera and video options are impressive, bu they’re largely contingent upon hardware, as is the new Android Beam NFC sharing app. If you’re at all interested in these nitty-gritty parts of Android, you owe it to yourself to check out SlashGear’s review. We’ll have our own in-depth look just as soon as the Galaxy Nexus makes the long trek across the Atlantic.