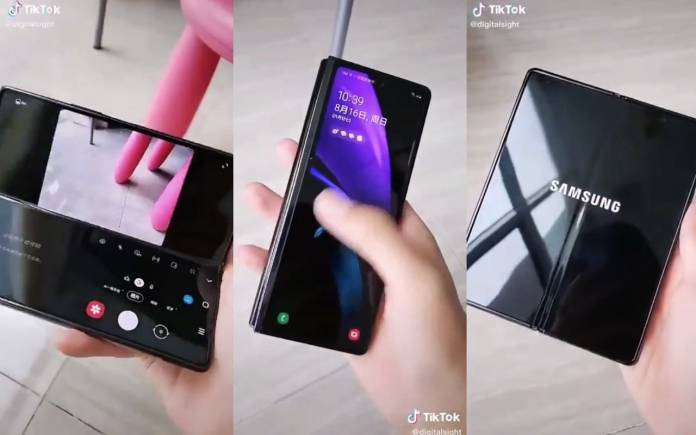 You may not like TikTok for many reasons but the Chinese-video sharing app is oftentimes a source for many things. Well, apart from crazy videos, TikTok can also be a source for early sightings of new gadgets. Recently spotted on a TikTok video is what is believed to be the Samsung Galaxy Z Fold 2 5G. The second-generation Galaxy Fold with 5G connectivity has appeared in one video and then shared over on Twitter. We’re assuming the 5G foldable phone could either be a test or review unit released before the official market release in China.

The device hasn’t been put up for pre-order yet. It will begin next month (maybe September 18) with release happening shortly after. Some are saying an October rollout can be expected.

What we’re more interested in here is the idea that a 4G variant may still be introduced. The Galaxy Z Fold2 5G is sure but people are curious if a non-5G model will also be available.

Samsung is expected to produce 500,000 units of the Galaxy Z Fold 2. It’s the initial number but more may be added later. Samsung will be selling the smartphone outside South Korea and China.

When it comes to color variants, the phone featured in the TikTok video is Mystic Black. A Mystic Bronze may also be revealed. It’s the newest signature color from Samsung as Mystic Bronze versions of the Galaxy Z Flip 5G, Galaxy Buds Live, Galaxy Watch 3, and Galaxy Note 20 series are also now ready.