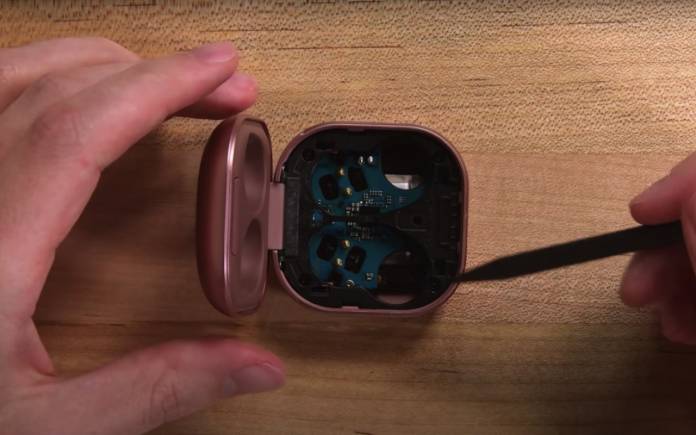 This is the first time we’re seeing a pair of Galaxy Buds being torn open but we don’t think it’s the first time. IFixit has managed to do a teardown treatment of the newly announced Galaxy Buds Live. The pair is also called as the Galaxy Beans because they look like beans. An unboxing video by T-Mobile exec Des Smith even showed off the device placed beside jellybeans. They look a lot like beans but bigger so they fit just right inside the ears.

The small size of the Galaxy Buds Live makes it easier to open. You just need to know what you’re doing so you don’t break the device. The left bean and right bean look like real beans you’ll want to open.

The Mystic Bronze Galaxy Buds Live isn’t pure bronze. The half part is made of brown plastic. To open the “bean”, IFixit pressed it using a tool to make a gap. The gap made it easier to open the two halves.

Once opened, you will see a label that says either “bean left” or “bean right”. You will notice a silver gasket (seal) glued in place. It’s the one responsible for the IP water-resistance rating.

The device is very small but the video shows all the parts including the tiny mics. The goal is to remove the motherboard so the chips can be analyzed. On the other side of the motherboard are more components plus another mic and a power contact that connects the batteries. The batteries are not a challenge to replace as they are standard size.