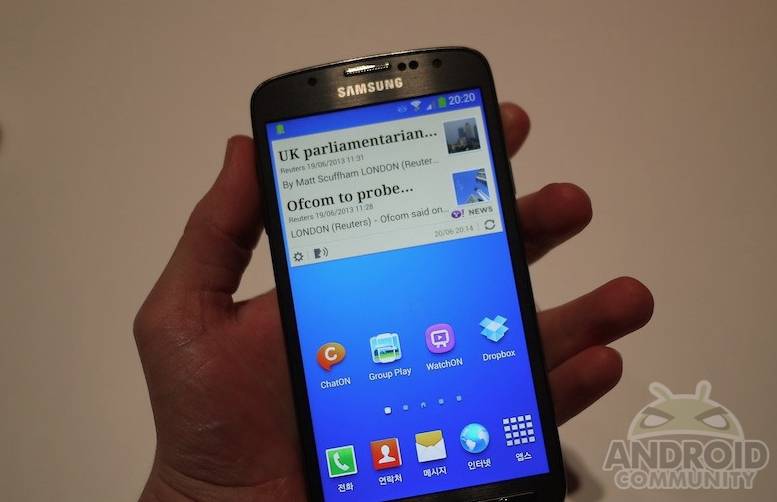 Samsung previously announced the the Galaxy S4 Active, however that didn’t stop them from showing the handset during the Premiere 2013 event which took place a bit earlier today. As a result of the Galaxy S4 Active being on display, we got to spend a bit of time checking it out in person. The Active is the dust and waterproof version of the Galaxy S4 and that was one of the highlights of the event.

Samsung showed the handset being dunked in a tub of water and even talked a bit about the Aqua Mode. This mode, as the name would imply — is for use when in the water. Basically, Aqua Mode will allow you to take pictures and capture video while underwater. Also worth mentioning, the bit about the handset being dust and waterproof comes by way of the IP67 certification. 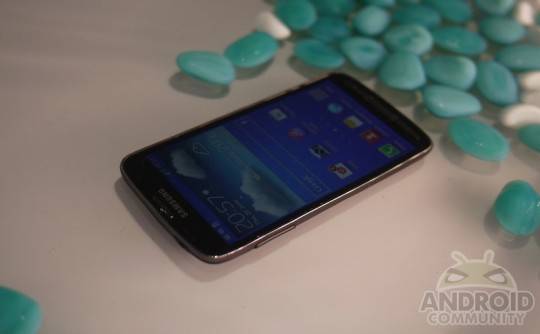 For those curious, that means the Galaxy S4 Active should be good in up to one meter of water for up to 30 minutes. Keeping on the topic of capturing images and video, the Galaxy S4 Active is equipped with a rear-racing 8 megapixel camera and a 2 megapixel front-facing camera. Otherwise, the handset is sporting a 5-inch Full HD display, quad-core 1.9GHz processor, 2GB of RAM, 16GB of internal storage and a microSD card slot.

With the exception of the 8 megapixel rear-facing camera, the handset is quite a bit like the regular GALAXY S 4. For comparison, the regular model has a 13 megapixel camera on the back. The other notable difference between the regular and Active models will be found towards the bottom of the front — those three buttons. The Galaxy S4 Active has a physical button for Menu, Home and Back (in that order from left to right) while the regular model has a physical home button with the others being capacitive. You can see the side-by-side of the two in the above gallery.

Despite the Galaxy S4 Active being dust and waterproof, it is not big and bulky like similar handsets. In fact, when sitting next to the regular GALAXY S 4, the handsets are really close in size. There are however some differences in design. These differences come in addition to the buttons and can easily be seen on the back of the handset. The Galaxy S4 Active has an edging towards the top and bottom on the back. The camera lens, flash and Samsung logo however — are all sitting in the same place.

While the Galaxy S4 Active was shown today, the handset has already come available for pre-order with AT&T. The carrier has it priced at $199.99 and available in Urban Gray and Dive Blue. Those pre-orders are expected to ship on June 19th and in-store availability is set to begin on June 21st. Bottom line here, the Galaxy S4 Active looks like a good option for those who were interested in the regular model, but wanted something a bit more friendly for the active outdoor type of user.