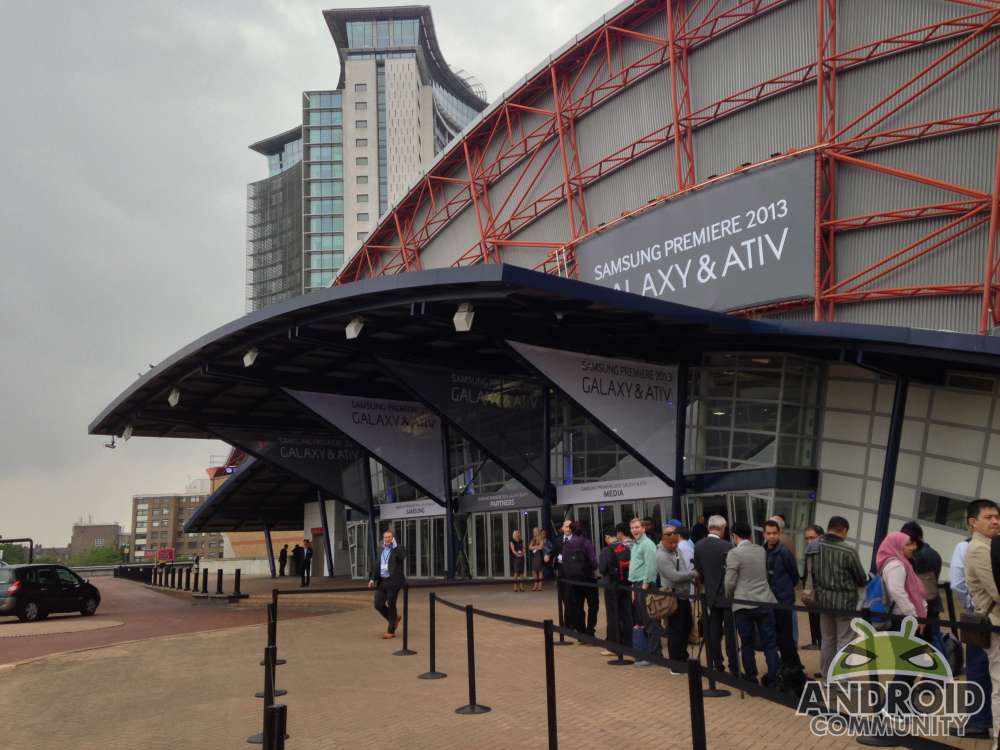 It’s June 20th, the day we’ve been waiting for, where Samsung is set to take the stage and drop a flurry of new Android-powered products on the world. We’re here live at London’s Earls Court Event Center for Premiere 2013, and we’ll be sharing all the details live as they happen, and of course getting our hands all over whatever Samsung announces. So what do we know, and what should you expect? Read on for more thoughts.

For starters, the show starts at 11 AM PST. Today isn’t all just about Android (although it should be) and Samsung is revealing details on their Windows ATIV line, and some GALAXY products. So we’ll see 2-3 Android devices, and 2-3 Windows devices. If you’re a Windows Phone or Win 8 fan, get excited, but for us it’s all about the green robot.

There hasn’t been much speculation or rumors regarding what Android devices Samsung will be announcing, and that’s probably because they’ve been leaked by the truckload the past month. While we could get thrown a curve ball and surprised by a new Galaxy S4 LTE Advanced with Qualcomm’s new Snapdragon 800, that’s unlikely as it isn’t market ready yet. However, this is what we’re expecting ourselves.

Samsung Galaxy S 4 Zoom
Samsung already revealed and officially confirmed their Galaxy S 4 Zoom earlier this month, but no one has been able to test it out or get their eyes on it. We’ll learn all the nitty gritty details today, and hopefully get an extended hands-on with the smartphone camera hybrid after the show. It’s a 4.3-inch Galaxy S 4 Mini in sorts, with a massive 16.3 megapixel lens on it. Likely the same one from the Galaxy Camera released last year.

Galaxy NX Camera
Speaking of cameras, Samsung will have another photography focused device at this show, and that is the NX Camera. It leaked in full last week, after tons of speculation, and Samsung hasn’t confirmed a thing. Following their NX line of swappable lens cameras, it’s rumored to rock a 20.9 MP shooter, and be quite impressive. More details are available here, and we’ll certainly learn more later today.

Galaxy S 4 Active/Mini
The Samsung Galaxy S 4 Active has already been announced by Samsung, but they still aren’t out in the wild or in the hands of the press or media. Well, not officially. We may see one or both of these today, but they certainly won’t be the star of the show. We could get the final details on the Mini, though. The big deal today for Android will be the NX Camera, and that’s probably all.

Samsung could throw us all a curve ball and announce something we haven’t seen, leaked, or talked about, but that’s doubtful. What are you expecting to see, and what are you most interested in? There’s also talk of an AT&T 4G LTE Galaxy Mega and that 6.3-inch display. So that’s interesting. Stay tuned for all our coverage and hands-on pictures and video.