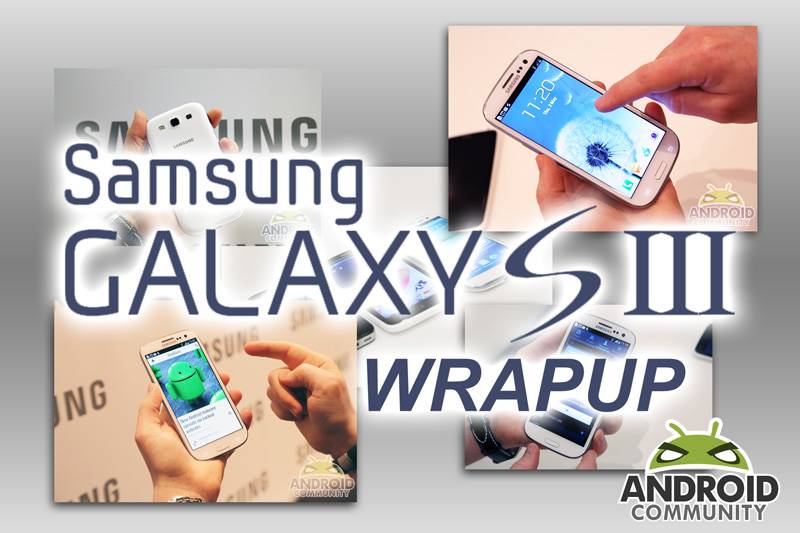 Samsung hit the ground running this afternoon with the announcement and revealing of their new Galaxy S III flagship smartphone. Surely you’ve been following along here at Android Community and saw all of our news coverage and hands-on video, right? In case you didn’t here’s a wrap-up of all the details, pictures, and video from the new Galaxy S III.

For those that missed it here is a rundown of the specs. The Galaxy S III will come complete with an amazing 4.8-inch 720×1280 Super AMOLED HD display, a powerful 1.4 GHz quad-core Samsung Exynos processor (in the UK at least), 1GB of RAM, 16/32/64GB of storage options, an 8 megapixel camera on the rear with zero shutter lag and a 1.9 front camera for video chat. The device is super thin coming in at 8.6mm, weighing less than most phones of this size (133g) and runs on the absolute latest Android 4.0.4 Ice Cream Sandwich and Samsung’s Touch Wiz interface changes.

While the design might not be the revolutionary step many had hoped for, Samsung has brought an impressive device to market and focused on improving their already award winning and top selling design, while enhancing many of the features and things we use day to day. They’ve beefed up the camera and introduced a 20 shot burst-mode, and the SGSIII automatically picks the best photo of the bunch, has face detection so you can easily tag and link photos to contacts, and they added camera mode while recording 1080p video. All of that and more was detailed in the video above, and we have more below.

Then, since we know everyone wants to see it we’ve compared the size, shape, and performance to the other king of the mobile world — the HTC One X and its 4.7-inch display and quad-core Tegra 3 processor in the video provided below.

Along with a great camera comes easy and simple functionality and that is exactly what you’ll get with the Galaxy S III and Samsung’s new S-Voice controls. A new competitor to Apple’s Siri, S-Voice takes the Google voice actions one step further and allows you to set alarms, check the weather, make calls and more — but best of all it can open apps. Siri can’t do that. You can open Google Maps, place a call, start music and more all with your voice using Samsung’s S-Voice integration.

Since rumors are a moot discussion at this point. Here are a few key links regarding the new Samsung Galaxy S III announced earlier today.

Another neat little feature or two you might not have read elsewhere is the SGSIII has Flipboard for Android, an exclusive to the device while they prepare to launch globally for Android. Then there’s this neat facial recognition feature. Not like the facial unlock from the Galaxy Nexus, but where the phone will actually recognize your face while you’re viewing a page, reading an email, or watching a movie and will not dim the screen. If you look away the screen dims to save battery, and stays on when needed so you don’t get interrupted. Neat right?

Now when can you get your own you ask? Well, Samsung has announced the phone will be available globally soon, but it will start off on May 29th in Europe, and May 30th in the UK. What about the US you ask? Samsung made a short statement that both an LTE and a HSPA+ model will be available for the various carriers in the US. That means most likely Verizon and the other two LTE carriers will get an LTE model (probably dual-core sadly) and HSPA+ models for folks on T-Mobile and possibly even a non-LTE model for AT&T. We can expect these phones in the US sometime in June if we are lucky but Samsung only mentioned “summer” for a release window. See everything and more from our Galaxy S III Portal.