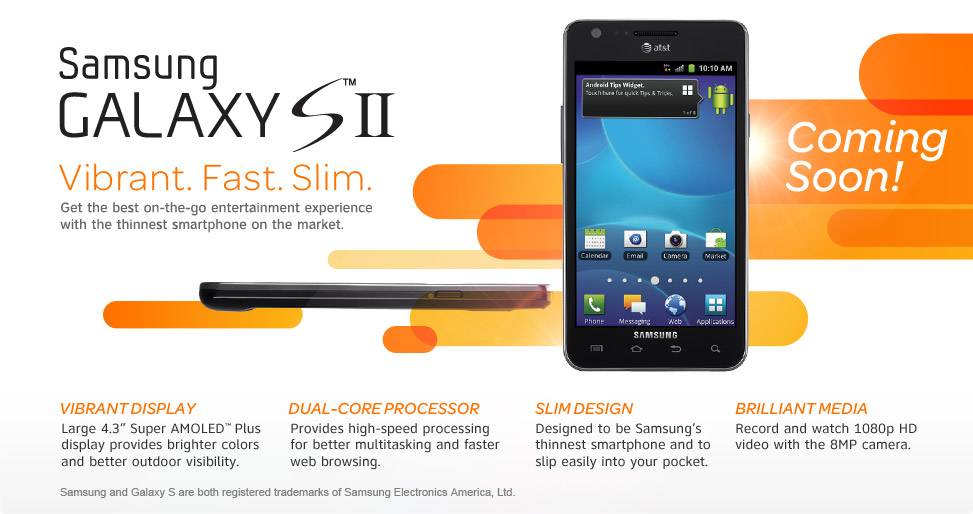 The team at AT&T are now officially ramping up their online attack for the Samsung Galaxy S II, posting this week their first sign-up page for email updates on the device, orange, black, and blue flying everywhere. Mostly orange though, of course, as AT&T has in recent months been pushing a massively orange-looking ad campaign to work in a rather aesthetically pleasing way with their heavily Blue and White globe logo. Look nice to you here? You betcha. It’d be rather tough to make this device look less than amazing, when you get down to it.

What this first page reveals is not just a whole heck of a lot of new information that we didn’t already know, the fact that this is the only 4.3-inch Samsung Galaxy S II scheduled for release in the USA (the rest being 4.5-inches) with the hot brightness and anywhere visibility of the Super AMOLED Plus display. Inside you’ll find a high-powered dual-core processor which on this page remains unnamed and un-clocked, and both Slim Design and Brilliant Media are pumped up as high-class features. Record and watch 1080 HP video and take 8 megapixel photos with the rear-facing camera amongst a slew of top-level features.

You can access the AT&T page at att.com and after you’ve signed up come on back and have a look at the hands-on content we’ve already got prepared for you courtesy of AT&T and Samsung in NYC back on the 30th of August – check out our hands-on with the ATT Galaxy S II and our quick look at the AT&T Featured Apps App for the Galaxy S II.