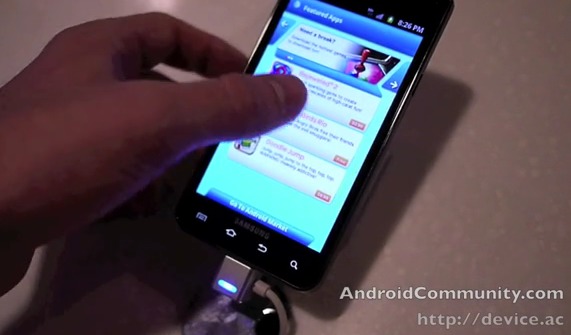 Beyond what we’ve seen thus far in what new apps we’ll be getting to see on these USA versions of the Galaxy S II, there are a sparse (and perhaps thankfully sparse) few additional new apps to behold on each of the devices. One app that we’re refreshingly GLAD to see added to the lineup comes on AT&T’s version of the Galaxy S II, an app called “Featured Apps”, it being an extremely simple system for AT&T to be showing off applications that it suggests specifically to the device it’s featured on, thereby helping the (perhaps new) owner with finding out with what their device is capable of.

Inside this extremely easy to understand tiny application, we’re able to cycle through several pages of suggested apps that include an icon and a short description of what they’re all about. Once you tap an app you’re interested in, you’re brought straight to the Android Market. Notice also, separate from this app, that the Android Market appears to be coming up as the newest version (version 3.0.27 as seen back in this post by Cory a week or so ago), this meaning you’ve got the ability to essentially lock anyone who isn’t you out from purchasing apps with your account should they somehow gain access to your device.

The AT&T Featured Apps app has only a few apps per screen, only a few screens here at the outset, and a simple About page for you to learn what version of the Apps App you’ve got running. This will almost certainly play a bigger role in AT&T’s future relationship with apps of all sort should it prove to be successful here on the Galaxy S II. It all depends on if YOU plan on using it.

Also note that this video was filmed at the GSII event in NYC that we attended earlier this week. Find all the Galaxy S II content your heart could possibly desire by hitting our [Galaxy S II] portal. Also if you’d like more information on the NVIDIA apps portal mentioned in the video, head to our hands-on post as well. Third party apps directories to the rescue!