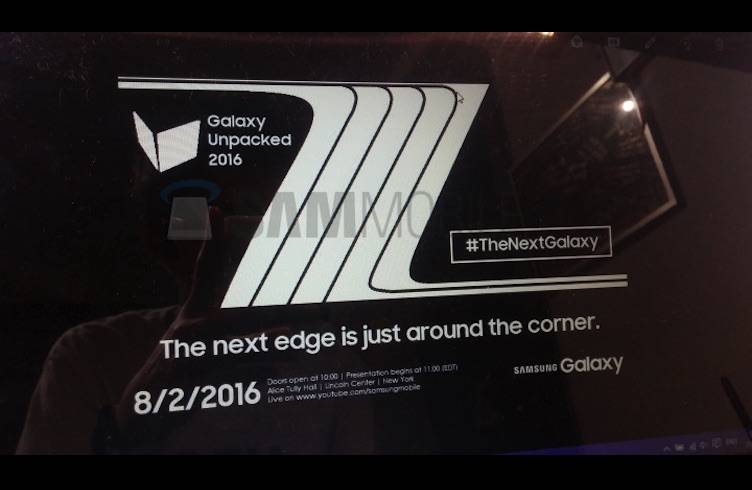 The Samsung Galaxy Note 7 is expected to arrive with either a Note 7 edge or an S7 edge+. Actually, we don’t really know about which variant will come with the new Note as long as a new phablet arrives. The past few weeks, we’ve been bombarded with numerous details about the Note 7 including the idea that Samsung is skipping ‘6’ to move to ‘7’ and that there might be another Note Edge or Lite variant. A teaser was shown off yesterday referring to a possible Edge screen plus the idea that there will be an iris scanner.

We’re hoping the new Note 7 will be unveiled this Summer, in August as tradition but maybe even earlier. Samsung usually introduces the new Note middle of the month so the August 2 launch is quite early. The next Samsung Galaxy Unpacked 2016 event will be where the new Note 7 is announced, hopefully, with a curved edge screen.

A poster-slash-invitation recently cropped up that tells us the “next edge is just around the corner”. It seems legit and not just a fan-render so we believe the August 2 announcement at the Galaxy Unpacked 2016. Venue will be Alice Tully Hall, Lincoln Center in New York. There are two many 7’s in the image that we’re guessing there will be more than one. No, not really five variants but maybe just two models with curved edge screens.

We’re almost sure about the Galaxy Note 7. Using ‘7’ instead of the ‘6’ makes more sense as Samsung will be aligning the new Note with the newest S7 and S7 edge flagship phones. Consumers won’t have to be confused now with the numbers.

So far, we believe that Samsung will be equipping the Galaxy Note 7 with the following: 5.8-inch QHD curved edge screen, Snapdragon 823 or Exynos chipset, USB Type-C port, 4000 mAh battery, and an iris scanner for eye-print recognition. Just like the Galaxy S7 and S7 edge, the Note 7 may be IP68-approved for water- and dust-resistance. Another rumor has it that Samsung will be adding the Focus app to the upcoming Galaxy Note 7.