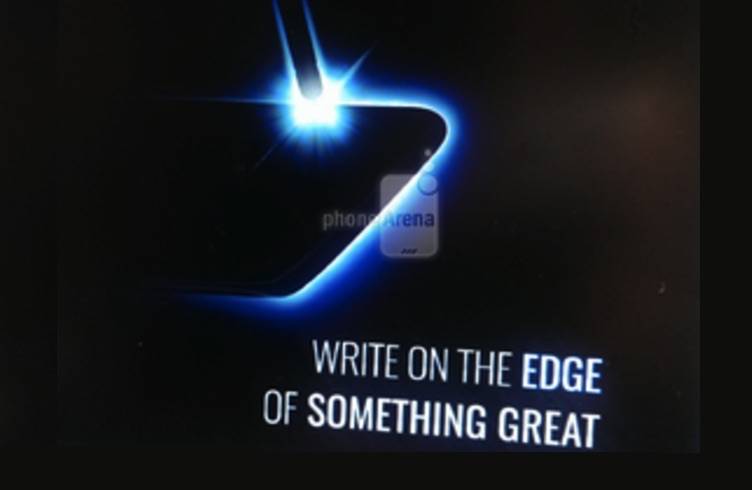 Samsung is set to launch the new Galaxy Note 7. It could still be a Galaxy Note 6 but we’ve been hearing rumors that the South Korean giant would be skipping the the ‘6’ and go directly to ‘7’. This is to make things easier because we’re already on the Galaxy S7 age. We’re not sure if there will still be an S7 edge+ but a high-specced variant of the current S7 edge is very much welcome. That or it could be another Note Edge variant—a Note Edge 7 perhaps?

A teaser image recently was shown off online but we’re not sure if it’s really from Samsung so let’s look at is as a rumor for now. This teaser for a phablet shows that it will be an Edge phone. There’s a phrase written: WRITE ON THE EDGE OF SOMETHING GREAT. We’re guessing “writing” on the edge part of the display is possible now, and not just for “touching” or as a place for the extra menu buttons.

PhoneArena shared the image and said it was sent to them by an anonymous source. It somehow tells us that indeed, a new “7” device will be launching very soon. A Samsung Galaxy Note 7 is much more believable now, thanks to the alleged poster image.

Samsung’s decision to align the new Note with Galaxy S7 is actually a smart idea. There won’t be confusion now and since Apple is about to launch the iPhone 7, the two companies could be closer rivals than ever before.
Rumor has it that the Note 7 will have the curved edges on the front and back, as well as, will have a new S- Pen.

So far, here are the specs we know the Samsung Galaxy Note 7 will be equipped with: 5.8-inch Super AMOLED display screen, 1440 x 2560 QHD resolution, Snapdragon 823 chipset, quad-core CPU, Adreno 530 GPU, 6GB RAM, and 12MP rear camera with f/1.7 aperture. No mention about the battery but expect it to be bigger.