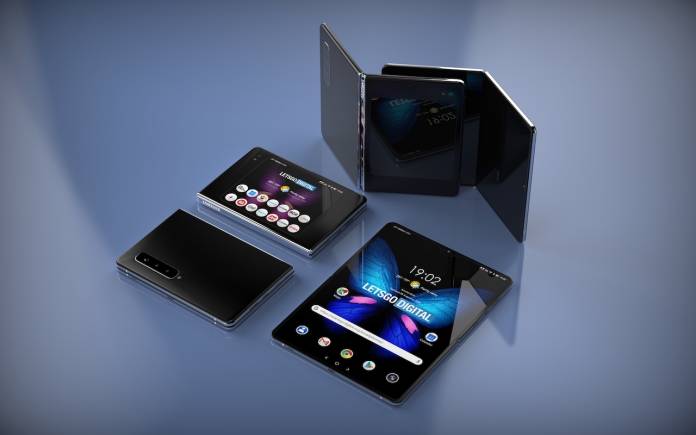 The Samsung Galaxy Fold hasn’t been relaunched yet but here we are, imagining the next-gen foldable phone from the South Korean tech giant. Images of the Galaxy Fold 2 has surfaced online. They are only renders from LetsGoDigital but we’re given a glimpse of what could be. In a few weeks, we may be seeing and getting a hold of the improved Galaxy Fold. Much has been said about it. We’re just waiting for the new premium smartphone from Samsung to drop.

We earlier heard the idea that Samsung was also considering other designs. To be honest, we don’t think the Galaxy Fold is the only foldable phone from the company. It may be the first-gen, a problematic one at that, but there is still hope for a better model.

Samsung is believed to be working on multiple models. This way, it’s ready if and when the Galaxy Fold completely fails.

Some Samsung patents surfaced online, giving LetsGoDigital several ideas. The renders below of a device that looks like the original Galaxy Fold tell us of the many possibilities. Note that these are just concepts.

One model features a hinge placed horizontally. When folded, the result is wider device. Another design shows a foldable phone that folds vertically, like the first Galaxy Fold. Another model shows a large front screen, wide edges, and triple rear cameras.

Make your imagination run wild. We have a feeling this set of renders won’t be the last.