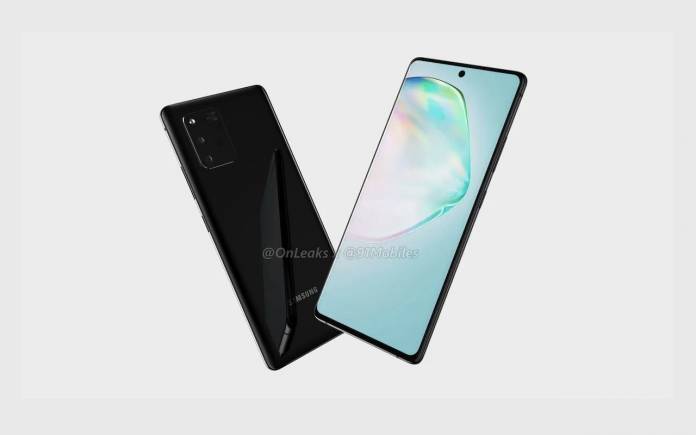 Samsung may be working on the next-gen premium flagship Galaxy S11 but the phone series is still due in February. That is a solid two months from now but before the launch happens, the South Korean tech giant is expected to introduce either the Galaxy A51 or the Galaxy A71. We can’t really say but there have been several teasers and leaks about the next mid-range phone. Today, we’ve also got information about the Samsung Galaxy A91. Nothing is certain and official yet but here are image renders and a 360-degree video.

As usual, the set was a collaboration between OnLeaks and 91Mobiles. We mentioned earlier this Galaxy A91 would be part of the Samsung Galaxy A Series 2020 lineup. Its camera specs surfaced including 108MP (Main) + 16MP (Wide) + 12MP (telephoto) 5x optical + ToF sensor.

The Samsung Galaxy A91 looks a lot like the Galaxy Note 10. It may also be similar to the Galaxy S11 with thinner bezels and a camera hole in the middle. We also noted before it may look like the upcoming Galaxy S10 Lite.

The phone comes with a curved glass panel on the rear plus a squarish camera module. Samsung’s next mid-range smartphone may also come with a Periscope lens. We’re not sure if there will be three or four cameras but we noted three a while ago.

Here are the specs and features listed recently: USB Type-C port, metal frame, on-screen fingerprint sensor, a 6.7-inch full-HD+ Super AMOLED screen, Snapdragon 855 processor, 8GB RAM, 128GB onboard storage, 4500mAh battery with 45W fast charging, Bluetooth 5.0, and Wi-Fi 802.11ac. Instead of 108MP primary camera, the Galaxy A91 may only come with a 48MP primary sensor with a 12MP ultra-wide-angle and a 5MP telephoto lens. The selfie shooter could be 32 megapixels. Dimensions could be around 162.4 x 75.6 x 8.1mm.

Rumor has it this Samsung Galaxy A91 is actually the Samsung Galaxy S10 Lite. Samsung may be playing with us here but really, the name doesn’t really matter. We’re all about the features, performance, availability, and price. Let’s wait and see for the official announcement.