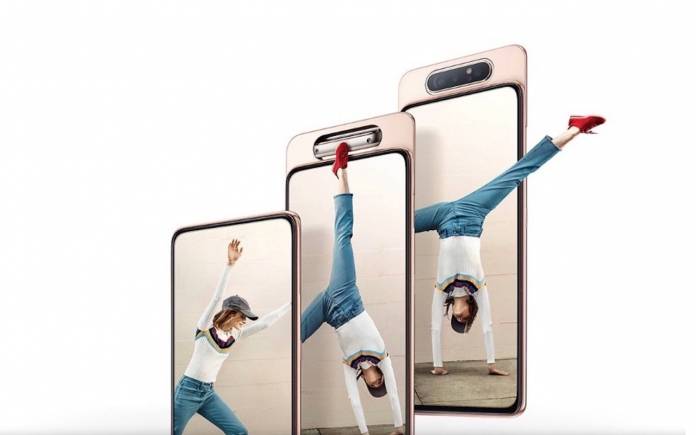 Samsung could be working on a new slide out camera smartphone. There is no official announcement but the South Korean tech giant may be introducing the new smartphone soon. The new mobile device is believed to be the Galaxy A82 5G which could be a blast in the past. Remember the Galaxy A80? That one came with a rotating camera module. Samsung may be experimenting with other forms apart from foldable phones so we can probably expect another innovative design.

The upcoming Samsung Galaxy A82 5G may come together with other Galaxy A phones like maybe the Galaxy A52 or Galaxy A72. The name doesn’t matter at this point. We’re just happy to know this will be another 5G mid-range smartphone.

The new camera could be a slide-out or another flip-up camera. The design of the Galaxy A80 wasn’t typical but there are people that liked the phone that came out in 2019. No follow-up was made last year but the phone with model number SM-A826B could be it.

There was that Galaxy A81 rumor last year but it turned out to be the Galaxy Note 10 Lite. As for the Galaxy A82, the smartphone may be released in the market in the second quarter of 2021 or maybe even earlier. The Galaxy A80 was introduced in April 2019 so an April launch is a possibility.

But then Samsung has been showing off new products a month earlier than usual. The Galaxy S21 phones were unveiled in January instead of the traditional February launch. Most product launches are virtual now too so the company can work on more important things.