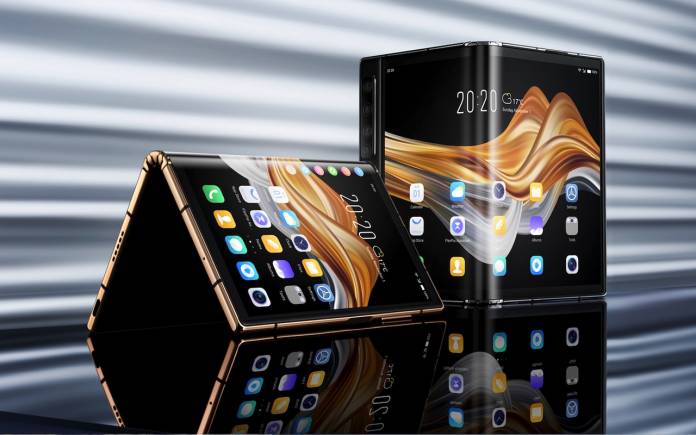 The world may be going crazy over the new Samsung Galaxy Z Fold 2 and other foldable phones in the works but we haven’t forgotten about the first foldable device to be commercially available. No, it’s not the Galaxy Fold from the South Korean tech giant. FlexPai has got that honor. In November 2018, the foldable-flexible phone just got real. The Chinese brand Royole introduced the foldable phone almost two years ago–even before the original Samsung Galaxy Fold was launched. The FlexPai started selling April last year. It was sold out quickly and soon underwent a Durability Test.

The FlexPai was fragile so careful handling was recommended. We also saw a teardown analysis. Earlier in March, a Royale FlexPai 2 was promised to be more flexible and foldable.

It was only last week that the foldable device reached TENAA. The phone is believed to undercut the Samsung Galaxy Z Fold 2 but we’re not sure for how much. Today, we’re seeing the second-gen FlexPai phone all over the web.

A Rouyu FlexPai 2 Folding Screen Phone is listed on Royole.com. The phone is listed with 8GB RAM and 256GB onboard storage. One color option is available: Starry Sky Gray (Cosmic Gray). As for the price, we’re looking at ¥9,988 which is about $1,472.

Royole’s new foldable phone is said to have passed 1,800,000+ bends in certified display folding reliability tests conducted by the National Institute of Metrology of China (NIM). It boasts a mirror-like smoothness and a foldable display for the best view.

Royole has applied the 3rd-generation Cicada Wing fully flexible display. It’s very light and thin like cicada wings. The technology has been updated so expect a higher contrast and brightness plus more vivid displays. A fast 0.4ms response speed can be expected as well.

The device’s size is just right. It can fit right in your pocket and easily carry it around. The design is seamless. You may not see any gap while folded, thanks to the 0-180° adjustable proprietary hinge. The flexible screen is water-like. It allows a new interactive experience as made possible by the WaterOS 2.0 which is already based on Android 10.