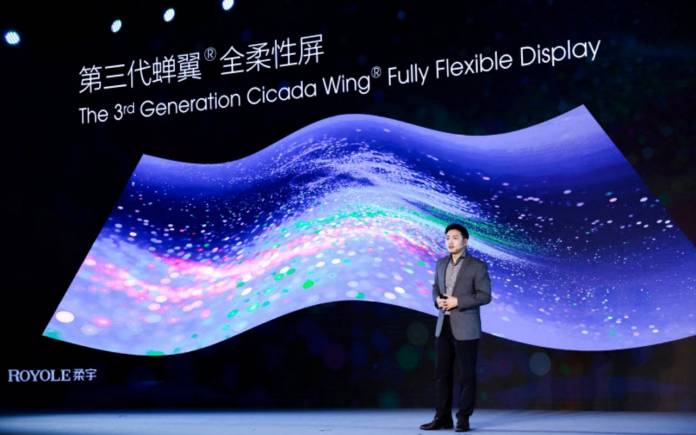 The meat of a foldable smartphone is, of course, its foldable screen. Unfortunately, they also happen to be the most fragile part in addition to being the most expensive. The durability of these flexible screens has been one of the biggest concerns people have over these seemingly futuristic devices and neither Samsung nor Motorola, let alone Huawei, seem to have been able to find the perfect solution to this manufacturing and engineering problem. Royale, the actual first company to sell a foldable phone, will make a second attempt at solving that.

If you’ve never heard of Royale, you aren’t alone at least not until the end of 2018 when it launched the world’s first commercially available foldable phone, the FlexPai. Of course, Samsung launched the Galaxy Fold a few months later, stealing the spotlight but now Royale is aiming to make a comeback with, what else, the FlexPai 2.

At the center of its second foldable phone is its third, not second, generation Fully Flexible Display (FFD) which it dubbed the 3rd Gen Cicada Wing. This screen, it boasts, has improved viewing angles and brightness that will make it possible to conveniently view anything at almost any position. A new custom-designed driver promises to improve image quality and color reproduction.

Its biggest improvement, however, might be how it is able to fold down to a 1mm bend radius, as flexible screens are notorious for requiring some gap at the fold. Royale also claims the screen can withstand more than 200,000 folds, the same boast Samsung makes with the Galaxy Z Flip. Unfortunately, the latter is still too generous an estimate.

Royale didn’t reveal more details about its upcoming 7.8-inch 4:3 FlexPai 2 but it will be a surprise if it doesn’t come with high-end specs like a Snapdragon 865. Despite all that, however, the phone’s limited availability in international markets will remain an almost insurmountable hurdle for Royale to establish its name in this still niche market.