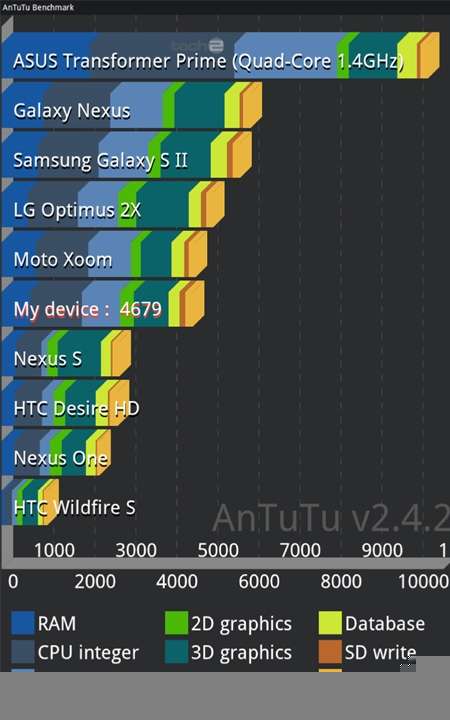 Speed junkies, prepare to meet your next enabler. The Asus Eee Pad Transformer Prime is expected to be the first device to run Nvidia’s quad-core Tegra 3 processor when it’s announced on November the 9th, and some eagle-eyed testers have the found processor and component speed benchmarks in the AnTuTu database. Needless to say, this thing is a beast.

The 1.4Ghz quad-core processor scored 7,596 points on the AnTuTu database. Specifics aren’t given, but it looks like the Transformer Prime is pushing near the 10,000 mark, easily besting all comers including the new Galaxy Nexus. It looks like the Tegra 3 is beating everything else except in one strange exsmple: 3D graphics. There, the Galaxy Nexus, Galaxy S II and Optimus 2X look like they’ve got a better score, though that could be an error in testing or  trick of the scaling bar.

You can see the results for yourself – AnTuTu is a free download on the Android Market. As for when you’ll be able to get a Prime tablet for yourself, we know that Asus is planning an announcement on November the 9th, but there’s still no word on pricing or availability. In the meantime, curb your enthusiasm with a teaser video for the Transformer Prime, then one for the Tegra 3 processor.