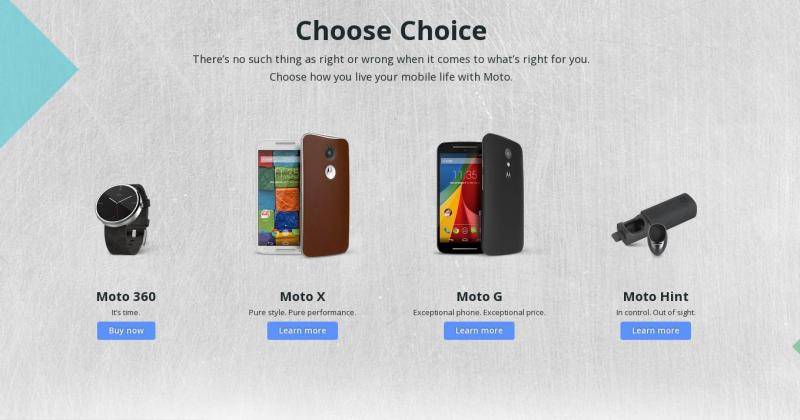 If you’re in the market for a well-rounded, almost-vanilla Android device, now might be a good time to put in your money for a new Motorola smartphone or wearable. The company has now opened up its website for pre-orders for its latest generation of the Moto X and Moto G smartphones, the Moto 360 smarwatch, and the very talented Moto Hint earbud.

Though a bit delayed, Motorola’s refresh of its Moto line was definitely worth the wait when it finally unveiled them at IFA 2014. The New Moto X takes everything that we have admired and drooled over on the previous Moto X and have taken things up a notch, with improved hardware (though slightly questionable display choice), and enhanced Moto software features, all the while staying inside the “pure” Android experience that the OEM has been committed to. The New Moto G is also a notable step up for the affordable beast. Again, the now larger display might leave a bit of a question mark, but you might forget that once you notice that the smartphone now sports dual front facing speakers and, defying Google’s inclinations, a microSD card. And while it definitely won’t be able to stand up to the Moto X in terms of features, it does carry its own load that gives a lot of power to the user without bumping up the price.

Much hyped, much awaited, and now finally here, the Moto 360 was supposedly the first round Android Wear smartwatch to hit the market. But while the LG G Watch R has stolen that title, the Moto 360 has the advantage of design, a smaller size, and wireless charging. But that’s only the hardware, as the software side of the equation rests totally in the hands of Google’s Android Wear, and that aspect might still need a bit of growing up to do. The Moto Hint was a very welcome surprise. We were teased a Bluetooth mono earpiece and we got one that could almost qualify as a wearable. Integrating nicely with Moto Voice but still usable with the likes of Siri or Cortana, the Hint takes hands-free voice-enabled smartphone operation to a new level. With Infrared senors that can tell whether its worn or not and a touchpad for those instances when you need a tap, the Moto Hint makes a perfect companion for the Moto X, wrapped in a stylish and a less conspicuous package. The only downside? Motorola has hinted at a two-piece stereo version in the future, which could deter potential buyers from jumping in right now.

The Moto Hint carries a price tag of $149.99. The Moto 360, which can also be bought from Google Play, comes at $249.99. The Moto G arrives with a $179.99 price tag and can be purchased as either a US GSM model or an international one. The Moto X, of course, is always special, as it is available via Moto Maker. You can build your own personalized smartphone, starting at $499.99 for the 16 GB model. Throw in $25 more and you can pick your choice of back cover, which now includes a selection of leathers in addition to wood.