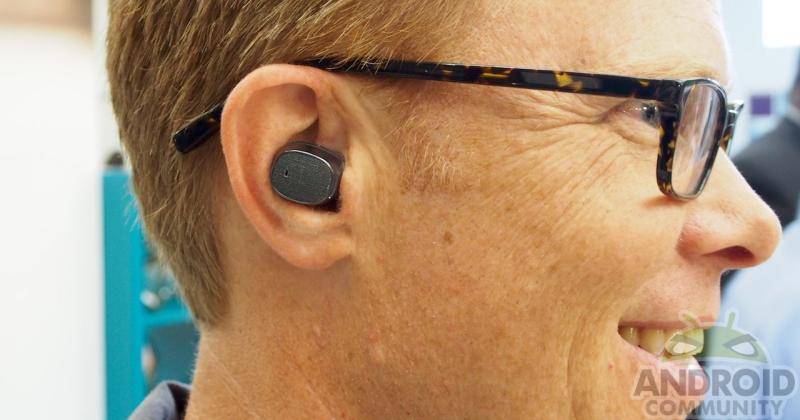 Motorola has a weaerable surprise here at IFA 2014. While it did hint at some sort of a Bluetooth earpiece, this new Moto Hint wearable is anything but conventional. Small, inconspicuous, and smart, this Bluetooth mono earbud is the perfect companion for the new Moto X, putting the power of its always-on Moto Voice features, not at your fingertips, but in your ear.

Many Bluetooth earphones, headpieces, and earbuds advertise voice-controlled integration with smartphone virtual assistants, but the Moto Hint is hands down the most hands-free and hassle free of them all. It doesn’t even have any buttons at all. It does have a capacitive touchpad for those times when you might need an “OK” action, but everything is all voice-controlled. This will truly put Google Now’s capabilities to the test. At the moment, there are still some parts of Google’s voice-controlled assistant that would require some manual manipulation. But since there is no display at all, except when you pick up your phone, everything has to be done by voice.

Google Now isn’t working alone though. Motorola’s own Moto Voice lends a helping hand, particularly with that always-on feature. No need to unlock your smartphone or tap the touchpad. All you need is to speak your mind. And you won’t have to shout either, as the bud’s microphone is sensitive enough to hear you whisper. The connection between the Moto Hint and the smartphone works even at a distance of 150 feet, so there’s no worry even if you left the phone in the bedroom. Moto Hint is also ergonomically design that it snuggles in your ear comfortably and yet, at the same time, securely. No amount of jumping, shaking, or wiggling will be enough to dislodge it.

Moto Hint is also smart enough to know when its in your ear and what to do when its not. If you are in the middle of a call and you put on the earbud, it will transfer the audio from phone to your ear. Take it off again and it will put the call back to the smartphone. When it comes to playing music, it does the same except that when you take it off, it pauses the music instead of transferring it to the phone’s speakers for those moments when suddenly blasting your tunes out loud would be too embarrassing. This seemingly magical feat is made possible by Moto Hint’s infrared sensors that can determine whether you are wearing it or not.

One of the great things about the Moto Hint is that you don’t even need a Motorola smartphone to use it. You can pair it up with any Android smartphone or even an iPhone, a Windows Phone, or an upcoming BlackBerry. Practically any platform that has some sort of voice-controlled smart assistant and a way to trigger it with a push of a button. The only caveat is that, outside of the new Moto X, you won’t get that always listening feature and will have to resort to tapping on that touchpad to start the process.

The Moto Hint will come with either a silver or black anodized body, with choice of linen, leather, or wood for finishing. This smart earbud will launch in October in the US with a price tag of $149.99, available from Motorola and select retailers, and later on in other regions during the holiday season. Motorola disclosed that it is also working on a stereo version of the earbud, which will involved two separate buds that won’t be connected by any wire of some kind, definitely a feat that is worth waiting for.