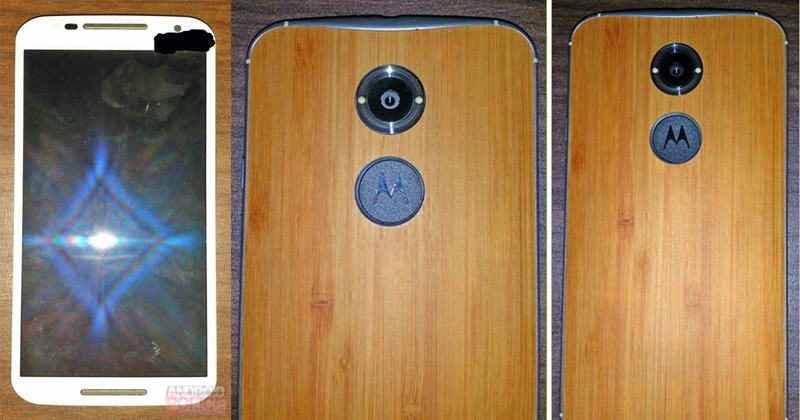 We’ve been waiting a while now for the device that Motorola has called the Moto X+1, possibly the new flagship phone of the Lenovo-owned company after the Moto X. We still don’t know what the “+1” means, but there have been a number of leaks and information showing us what the phone might look like, and this specific leak is probably the closest we’ve gotten to the real thing so far.

The source of the leak claims that this is a “near-final” prototype, and just from the looks of it, we can say that it is closer to legitimate than fake. The design language is pretty much Motorola in most respects – there is no sign that Lenovo people made any radical changes to the aesthetic and physical aspect of the phone. What we have here is a device that looks very much like the Moto X, down to the signature wooden back plate/cover.

There are a few improvements to the design though – the Moto X+1 is touted to have a 5.1-inch screen as compared to its predecessor’s 4.7-inch screen. From the pictures, the phone looks to have done away with capacitive touch buttons. If you noticed, there are also two white dots on the sides of the camera module – the source says that these are dual LED flashes. Other specs have been thrown around and discussed here in this blog repeatedly, but all signs point to a premier flagship-type phone.

The feeling from this leak is that Motorola is pretty near in finalizing the product, which industry hacks are expecting to be launched side-by-side the Moto 360 wearable device. As with other leaks, we haven’t really seen any screen turned on and phone details being confirmed, so anything is still possible with this device. But what we’re seeing here is most probably the closest we have come so far to seeing the Moto X+1 in existence.