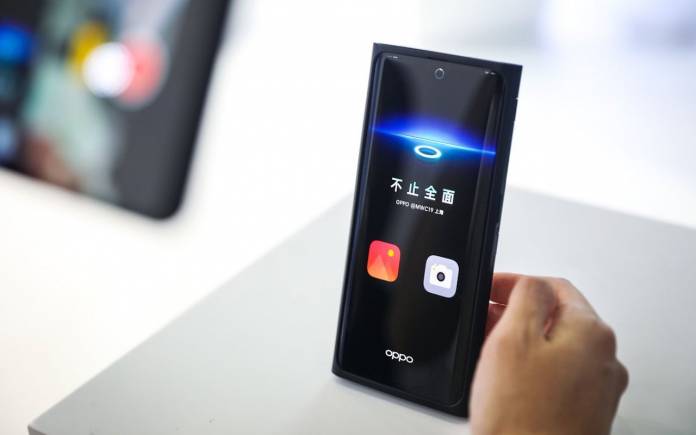 OPPO is another brand from China that’s been prolific when it comes to launching new smartphones and technologies. It’s one of the busiest right now with several models lined up. Just yesterday, we told you about the Realme sub-brand introducing a 64MP camera phone soon. There’s also the under-display camera technology teased in a video and rumored last week. An OPPO foldable phone is being designed and it may come with a pop-up camera. Of course, things are unconfirmed until an official announcement is made.

At the MWC Shanghai, OPPO has revealed new technologies that will change many things on the smartphone horizon. It’s the under-display camera tech we mentioned earlier. Like Xiaomi, OPPO has been working on a new camera technology that will fully eliminate the need for a notch or a camera hole or even pop-up selfie cameras.

OPPO has launched the Under-Screen Camera (USC) at a recent event. It is more of a hidden tech lens that will be available on future OPPO phones. The idea is that the camera is embedded in the screen. It comes after the idea of an on-screen fingerprint sensor and now OPPO has used the same principle.

We haven’t seen any sample selfie photos yet but we’re not expecting too much from OPPO, at least, not yet, until the next few models. The fact that the camera is behind a screen already presents the possibility of quality loss but good thing a post-processing software can do the job.

OPPO has also introduced MeshTalk. It is a new system for messaging and calls that doesn’t rely on WiFi, Bluetooth, or cellular network. It’s altogether a new technology. OPPO says that it is more of a “decentralized short-range communications solution”.

MeshTalk needs new hardware though. It depends on a low-power chipset that allows Oppo devices to relay messages when they are within 3km range. We’ve heard something similar before but OPPO wants to bring the idea to more consumers with different devices.

Privacy is an advantage because the devices can only “talk” to one another within the network. It’s a great idea but this exclusivity means people need to have MeshTalk-compatible smartphones and other devices. We’re expecting related announcements in the coming months so stay tuned.