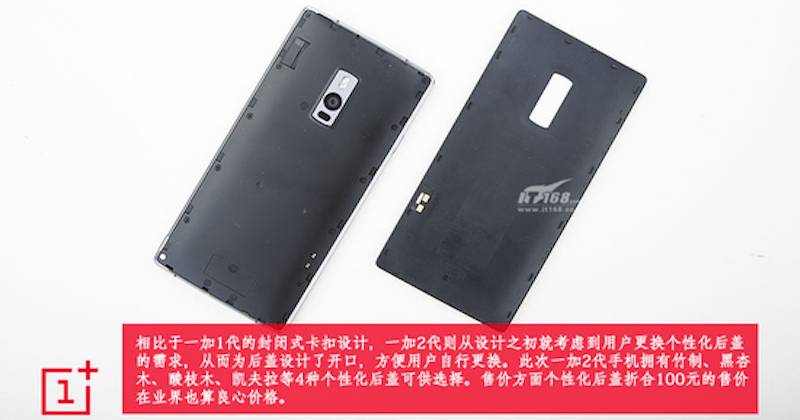 The OnePlus 2 has finally arrived after months of speculations, rumors, and hints. OnePlus has launched the new flagship in a virtual reality event and we were able to get a quick hands-on the phone and today, July 31, the company is hosting several pop-up events in different cities around the world. Prices were also unveiled and we only have to deal now with getting an invitation to purchase a unit.

The OnePlus team has been telling us that the new flagship will certainly be a killer and that they are proud of this model for many reasons. We still have no idea how many pre-orders or requests for invitations have been placed since the reveal but we’re hoping it will exceed the success of the OnePlus One. And just like any other hot mobile device in the market today, the OnePlus 2 already became the subject of a teardown. Nope, nothing from iFixit yet but one from China that we spotted online.

Chinese website IT168 did the first teardown and you can see photos below in the gallery. The teardown went okay and the “dismantler” did not have any problem tearing down the smartphone into pieces. You’ll see what’s inside the OnePlus 2.

OnePlus 2 looks nice with a metallic trim. As for dimensions, phone measures 151.8 x 74.9 x 9.9mm and is light at only 175 grams. To review, the OnePlus 2 comes equipped with the following: 1080p LTPS display screen, 3 or 4GB RAM, 16GB or 64GB on internal storage, a 13-megapixel OIS camera, dual-LED, dual tone flash, Laser Autofocus, 5MP front-facing camera, and a non-removable 3,300mAh battery. Those are high specs but (un)fortunately, the OnePlus 2 doesn’t have some premium features like NFC, wireless charging, and fast charging as we mentioned a couple of days ago. Out of the box, the new OnePlus smartphone runs Android 5.1 Lollipop already with Oxygen UI also running. Finally, OnePlus added a fingerprint scanner since that’s what most premium devices have now.

We don’t have much details how IT168 completed the teardown but there’s text in Chinese. Feel free to read or translate. For now, these images will give you an idea how OnePlus built the new OnePlus 2.