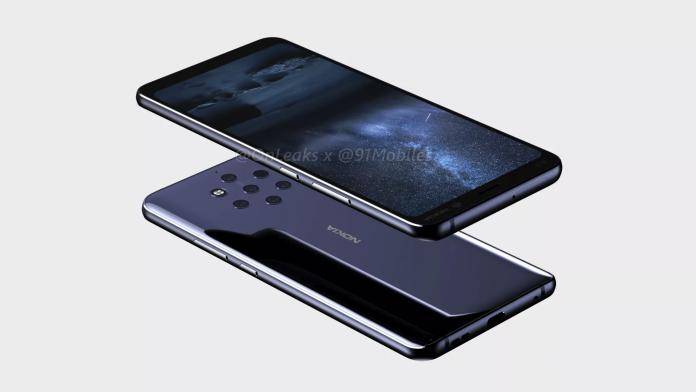 HMD Global has already released several Nokia Android phones but one of those more interesting models is the Nokia 9. We’ve heard about it since April 2017 when it was said to feature an iris scanner and OZO spatial audio. Pricing and availability were uncovered while sketches popped up online. The phone hit benchmarks but only to be reportedly canceled. And then the new year came, the phone was sighted again during the Nokia 8 launch. Back in March, we learned the phone would be released this year and may be ready with Snapdragon 845.

We’re still waiting. We want to know if it will have that in-display fingerprint sensor, notch design, and five lenses.

Five cameras again? This seems to be a trend as this isn’t the first time we’re hearing about multiple lenses. From the standard one rear to dual rear to triple cams as started by Huawei to quad cameras, we’re now at five.

OnLeaks and 91Mobiles teamed up to release these image renders and a 360-degree video of the Nokia 9 concept. This particular set is interesting because the images show not five but seven rings. We don’t think they’re all cameras. Five are camera lenses while the other two are a dual-sensor and a dual-tone LED flash unit.

Nokia 9 may feature Zeiss lenses and may include a depth-sensing camera, wide-angle lens, and telephoto. There is no confirmation yet but specs of the Nokia 9 may include the following: 5.9-inch screen, QHD resolution, narrow bezels, 155 x 75 x 7.9mm dimensions, single selfie shooter, in-display fingerprint sensor, glass panel to allow wireless charging, USB Type-C port, and a loudspeaker grill.

The phone may no longer include a 3.5mm headphone jack. The ejectable SIM card tray is now on top while the volume rocker and power button are on the right.