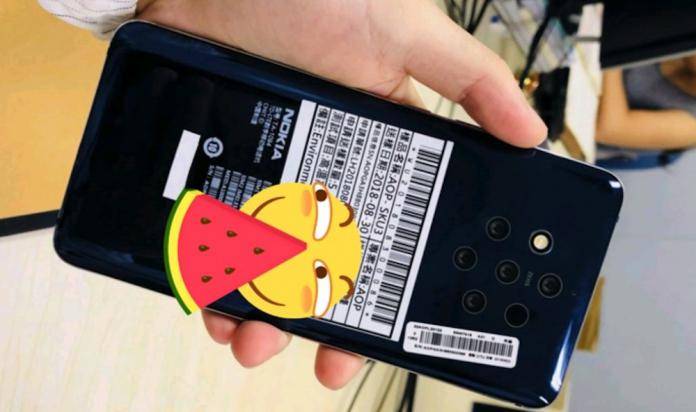 The Nokia 9 has long been the talk of gadget town since last year but it wasn’t officially launched. It was tipped to have dual selfie cameras and was said to have been sighted during the Nokia 8 launch. The Snapdragon 845-powered smartphone may arrive with an in-display fingerprint sensor and hopefully, a notch design. It could be another 2018 flagship phone but we’re taking everything with a pinch of salt until HMD Global makes an official announcement. The latest information we have is based on this image of what is believed to be a prototype Nokia 9.

Nokia’s upcoming smartphone, known as the AOP-SKU3 (or TA-1094), shows several images. We’re talking about not just three or four but five. That’s not two up front and three at the back but five lenses on the rear. This could also mean there will still be one or two at the front.

The Nokia 9 pictured appears to be blue and shiny. The premium phone is believed to arrive with an $850 price tag so we’re expecting more high-end specs including those cameras, notched screen, and an in-display fingerprint reader.

Some of the Nokia 9 specs we know so far include a 5.9-inch OLED screen with QHD resolution, curved glass display on the sides and notch, and Qualcomm Snapdragon 845 SoC. We’re guessing 6GB or 8GB of RAM.

As for the five lenses, they could be anything from a standard 24MP camera, 16MP wide-angle lens, high zoom lens, macro lens, and low light lens. These lenses may also be complemented by an LED flash and an infrared for sensing distance to a subject. We’re also looking forward to some Zeiss lenses and OZO Audio for a better listening experience.