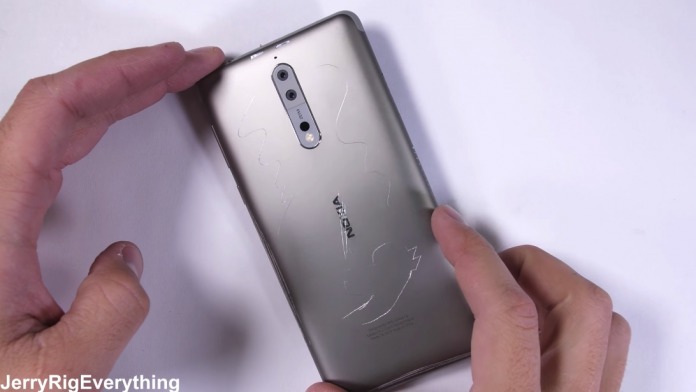 We knew the Nokia 8 is about to be opened. It has already passed Zack Nelson’s Durability Test. We noted it is strong enough to stand the test of time as it is solidly built as in the traditional Nokia fashion. The smartphone has potential to become a bestseller as soon as Android 8.0 Oreo is ready. Unfortunately, the Nokia 8 is being replaced by the Nokia 9 in the United States but it is still one interesting device. It is the brand’s first-ever flagship phone.

Zack is one of the first to pry open the device. With some heat and a standard metal pry tool, the phone opens. You can easily do it yourself but make sure you don’t press the power button. Slide the tool around the edge to get through the adhesive. With some more heat, the panel will be separated from the other side.

The display is held by two ribbons inside with some screws. Removing the rest of the screws must be organized so make sure you set them aside carefully so you will remember.

The next level shows 19 screws holding the middle plate to the frame. Note that they are of different sizes so lay them out in an organized manner so you can put them back as you’ve removed them. Next, remove the whole plate from the frame.

The screen is easy to remove and replace. What’s also very notable here is the copper heat-sink pipe found under the battery pack. This lessens the heat together with a thermal paste.

The Nokia 8 is definitely well-built. There’s a total of 30 screws inside so its structure is really solid. The device has IP54-rating so it’s also protected from some dust. It’s not exactly ideal to repair but easy enough compared to other phones.