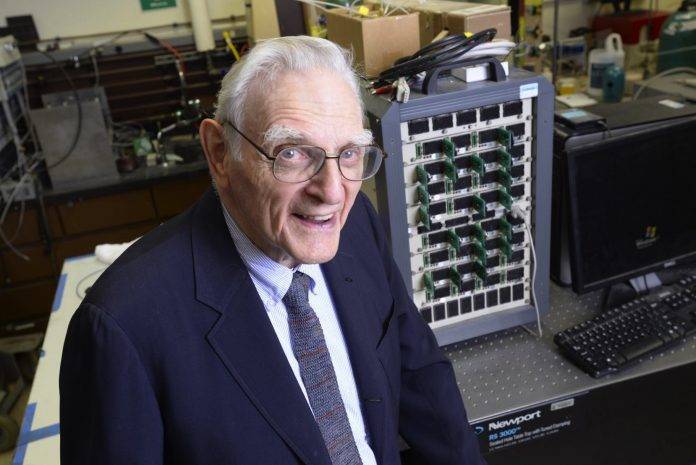 Believe it or not, battery technologies haven’t really made any progress in the past few decades. The main standard has always been lithium-ion battery which was co-invented by John Goodenough, a 94-year-old professor in the Cockrell School of Engineering at The University of Texas at Austin. Goodenough recently lead a team of engineers, hoping to come up with new all-solid-state battery cells that could be used for safer and faster-charing rechargeable batteries.

The goal is to develop new batteries that will be used for stationary energy storage, electric cars, and handheld mobile devices. It’s been a while since the lithium-ion battery inventor made a follow-up to the battery technology that was used in millions to probably billions of gadgets and electronics all over the world.

Scientists have been hard at work in trying to improve the technology but so far, we’ve only seen a few. One of the latest standard enhancements is fast-charging which admittedly still isn’t perfect. There’s the issue of overheating and explosions so some OEMs are not yet confident in using them on their products.

We’ve featured related battery technologies but none has fully made it to commercial use. We’ve talked about flow batteries, that non-flammable Li-on battery by Stanford scientists, Huawei’s graphene-infused Li-ion batteries, Supercapacitors, Panasonic’s super-thin lithium batteries, Toyota’s magnesium battery technology, and nanowire battery. Each technology has potential but not one is as effective and safe as the latest discovery of Goodenough and his team.

The Lithium-Ion battery inventor certainly knows his technology better than anyone else. His work with Cockrell School senior research fellow Maria Helena Braga is described as this: a low-cost all-solid-state battery that is noncombustible and has a long cycle life (battery life) with a high volumetric energy density and fast rates of charge and discharge.

The research was presented in the ‘Energy & Environmental Science’ journal and we can expect the study will be put to commercial use soon. The main idea is that a higher energy density can store more energy on a battery cell. The team came up with a new battery formulation that allows more charging and discharging cycles and faster rate of charging for longer-lasting batteries. You only need to wait minutes instead of hours to achieve full charging.

The team also made some important changes. From using liquid electrolytes to transport the lithium ions between the anode and the cathode, they used glass electrolytes that enabled alkali-metal anode–resulting to increased energy density. Solid-glass electrolytes also make it ideal to perform well in subzero degree weather which could be best for electric vehicles.

The new battery cells are said to be more advantageous because they can be created with earth-friendly materials. Brage explained, “The glass electrolytes allow for the substitution of low-cost sodium for lithium. Sodium is extracted from seawater that is widely available.”

Goodenough, Braga, and the rest of the team from UT Austin are working on some patents so they could start working with battery makers. Testing of the materials in energy storage devices and electric vehicles may begin soon.

SOURCE: UTNews (The University of Texas at Austin)