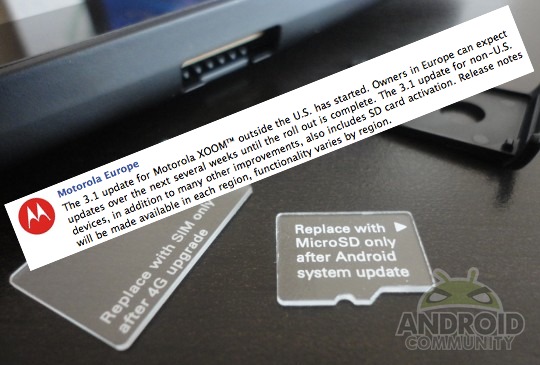 What in the world is going on here, you might ask? It appears that Motorola Europe will be heading off this particular wagon of updates, they having a Facebook status up that confirms that their Android 3.1 Honeycomb update will include activation of their SD card support for the tablet. Of course you know that if you’ve got this tablet inside the USA on a Verizon plan, you’ve already got the update – but without the SD card bit. What blasphemous set of clicks, developers developers developers, and carriers lead to this terrifying situation?

Only the manufacturer gods know for sure. What we do know is that non-US users are the only ones that’ll be seeing this update come to them over the air in the coming days and weeks, starting today. This update brings one of two long-awaited updates to the world’s first Honeycomb tablet, the other being 4G LTE speed capability for those, again, having the tablet as carried by Verizon. There are ways of grabbing the first of these two updates that aren’t technically official, of course, but we’re always wanting the real deal to be coming asap, of course.

There’s also news incoming via some intrepid Verizon employees that the name of the XOOM may well soon be changing to XOOM 4G or XOOM LTE, both of which would lead us to believe the device’s LTE capability will be activated sooner than later.

As for the microSD card bit, you could always head back to the post entitled Motorola XOOM gets SD card activation early via Tiamac Kernel and see how that works out for you. This would be a bit of a hacking situation where you replace the software in your device via some instructions you MAY find confusing. Because these instructions could also lead to your device being busted beyond repair, we suggest you exercise utmost caution, without a doubt.