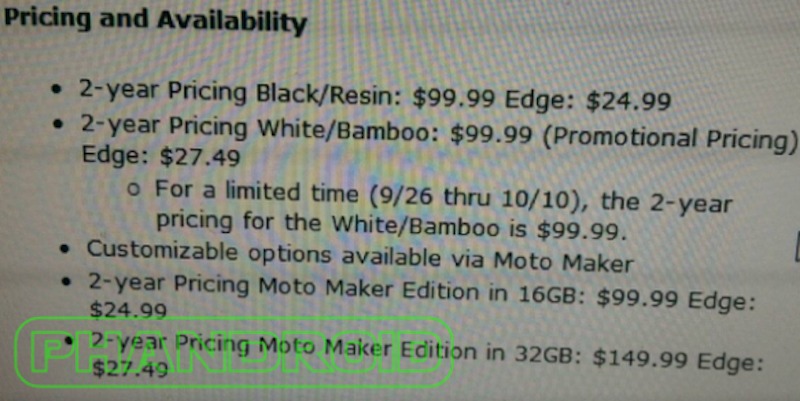 The Big Red has got more surprises in store for the customers. Aside from the 4G LTE-enabled Samsung Galaxy Tab S 10.5, Galaxy Note 4, WiFi calling, VoLTE Advanced Calling 1.0, and the early upgrade offers by Verizon, the mobile carrier is believed to releasing the next-generation Motorola Moto X this coming September 26.

Nothing official yet but a leaked memo shows the pricing and availability of the Motorola Moto X. A Blaclk/Resin Moto X model will be $99.99 on a 2-year contract for only $24/month. As a special promo and for a limited time, a White/Bamboo model is priced at $99.99 but will cost $27.49/month on Verizon Edge. Promo will run from September 26 until October 10 only.

As with any Moto X units, Verizon’s version will also be customizable via the Moto Maker (which also recently went live in the UK, France, and Germany). A 16GB model of the Moto X will also be $99.99 with a $24.99 monthly fee on Edge. Twice the storage capacity at 32GB, the model will be $27.40/month but with a $149.99 one-time payment under a 2-year contract.

Here’s a review of the Moto X specs: