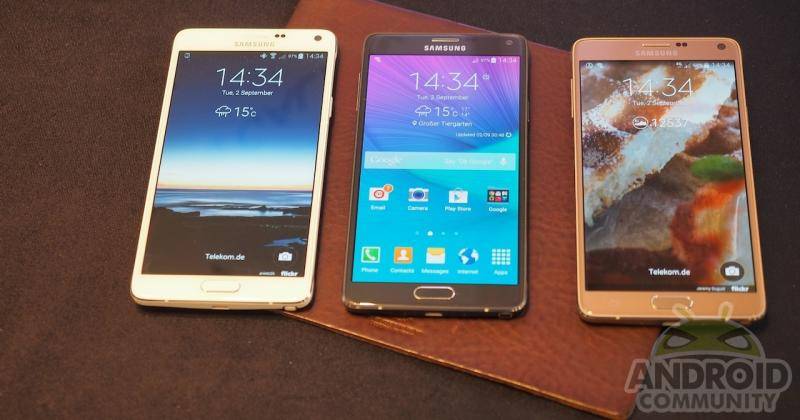 It’s pre-order week! Along with Motorola and that non-Android fruit company, Samsung is announcing the dates that its fans should be waiting for if they want a Galaxy Note 4. Although the S Pen phablet won’t be available until October 17, pre-orders will be starting tomorrow, including major US carriers.

The breakdown of prices per carrier are as follows:

AT&T will be making the Galaxy Note 4 available in Charcoal Black and Frost White and under several payment options. Under the Next 18 program, buyers can get it for $34.42 per month. For a shorter period of time under Next 12, they will have to give out a higher $41.30 monthly fee. A regular two-year contract costs $299.99 but for those who want to pay for the device in full, without a contract, it will be $825.99. AT&T subscribers might be happy to know that the carrier will actually start shipping pre-orders on October 14, earlier than the rest. But the smartphone will still only be available in retail outlets on the 17th.

T-Mobile, naturally, has a different pricing scheme but with the same two color options. Prospective buyers can grab a Galaxy Note 4 for a monthly fee $31.24 for 24 months. The total price for the device lands at $749.76. The sad news for this carrier’s customers is that pre-orders won’t start until September 24, but shipping is still scheduled for October 17.

Verizon‘s offering is a little limited, with the Galaxy Note 4 available only for $299.99 with a two-year contract. No news if a full retail version will be offered. That said, the carrier is throwing in a few bonuses in addition to making the smartphone available under their Verizon Edge program. Those upgrading to a new phone under its MORE Everything plan and already have 1 GB of data per month will get another monthly 1 GB allocation for the next two years, as long as the device remains activated under the same plan.

But wait, there’s more! During the pre-order period from September 19 to October 16, pre-orders from any US carrier or retailer will be eligible for a total trade-in of $200 for any working smartphone. And if those weren’t enough to convince you to go for the Galxy Note 4, perhaps its 5.7-inch QHD display, Adaptive Fast Charging, and enhanced S Pen with tilt and speed tracking might.